Her Face for the World To See

Her Face for the World to See
In the era of Harold Robbins, she wrote the book on love, mob-style.  From the mid-1950s to 1961 Liz Renay had the kind of troubles that only organized crime could render – subpoenas, jail, abandonment, disgrace, paranoia.  She had spiraled into the mob as a beautiful showgirl dating Albert Anastasia’s reputed bodyguard Tony “Cappy” Coppola.  Using him as a springboard, she bounced from New York to Hollywood, where Mickey Cohen introduced her to the casting couch. She leant Cohen some money and the gratuity ruined her life.  After a barrage of subpoenas and a grand jury appearance resulted in a perjury charge, a hanging judge threw her into jail for three years.  Her story’s title cried big tears:  My Face for the World to See.
Liz Renay – striptease dancer, B-girl, gun moll – confessed with no footnotes.  It’s not a perfect way to get the history, but in firsthand accounts of a woman’s life with the mob, it beats a blank.  The genre of not-really-true crime confessionals had been established earlier with the publication of the Roaring Twenties madam Polly Adler’s memoir, A House is Not a Home, the raunchy masterpiece of ghostwriting which became a bestseller.  In this type of confession genre, there is no documentation, no tangible facts save for what’s on public record – and fact-checkers have to look up newspaper records and court documents to establish timelines hiding beneath the innuendo.
Renay’s story does not resonate historically like Polly Adler’s tale of vice in the age of Tammany.  It does, however, put a personal spin on the intense pressure that mob associates felt in the McClellan era.  Renay blamed her three-year commitment on Robert Kennedy’s vow to get Mickey Cohen.  The tax evasion case against Cohen in 1961 and ’62 swept Renay into prison on a suspicious technicality after she’d been set free on probation on the perjury charge.   “Could Robert Kennedy be so base that he’d smash my life...?”
For Adler and Renay, the dangers were everywhere.  The D.A. had boiler-plated their names onto blue-backed subpoenas while the mob tailed them to within five feet of every police station house.  In an uncharacteristic way, their memoirs detailed lurid true-crime with a tender twist.  After a meeting with New York District Attorney Frank Hogan, Renay’s only thought is to take a warm bubble bath.  Polly Adler detested the experience of the prison shower messing up her salon-styled hair.   The editors chose to focus these molls' indignities on the trivialities of hair and makeup;
Maybelline  saved their world.
Consider that Renay talked about Albert Anastasia; Adler dished about Detroit’s Purple Gang.   Their musings were not based on specific activities but rather, gifts, proposals, manners – nothing to rival the revelations of Joseph Valachi or Henry Hill.  Neither woman was ever coaxed into protective custody or witness protection for selling out the secret of Cappy’s botched marriage proposal or the Purple Gang’s crass behavior while visiting Adler’s house of prostitution.
The warnings issued to known crime figures who have flirted with memoirs are well-known among readers of true crime nonfiction.  Those who did cross the line to talk lived out their lives in federally sanctioned hiding places.  Yet Renay and Adler carried on without the mob connections of their wild days.  Renay knew that after-the-fact meant just that.  She left the life of a moll for a 1970’s reinvention as a campy film star.


There are legions of historical gun molls who, framed in their black & white photos taken in courtrooms, mob funerals and police stations, didn’t change with time but remain frozen in whatever era they typify.  (See Reney below, on trial and accompanied by her loving daughter.)
By turning their tawdry experiences into literary stock, Adler and Renay elevated themselves and in doing so, escaped the mob.  It wasn’t easy.  Polly Adler’s worst John would prove to be the U.S. tax man.  Liz Renay made her image pay as an old stripper for the new age.  They both found life after organized crime.  More realistically, they stayed alive. (This blog is reprinted from an article originally submitted to the Las Vegas Mob Museum.) 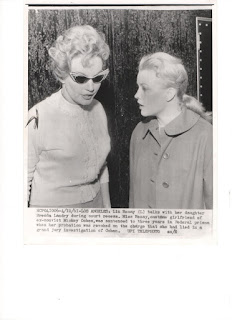 Posted by Ellen Poulsen at 11:33 AM
Email ThisBlogThis!Share to TwitterShare to FacebookShare to Pinterest
Labels: Ellen Poulsen