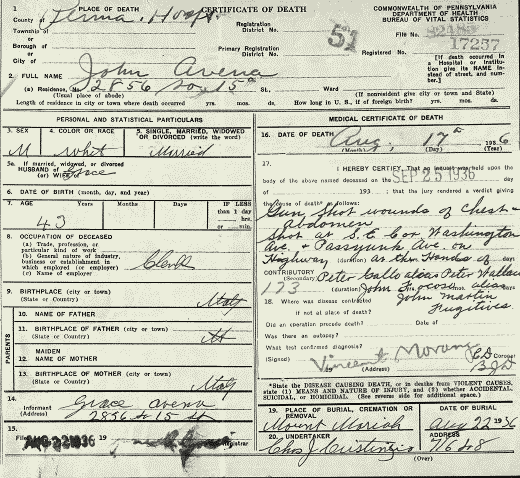 On this date in 1979, several masked men with shotguns and automatic firearms murdered Bonanno Crime Family bigshot Carmine "Lilo" Galante, 69, his bodyguard Leonardo Coppola, 40, and restaurateur Giuseppe Turano, 48, at a patio table in Joe & Mary's Italian-American Restaurant, 205 Knickerbocker Avenue in the Bushwick section of Brooklyn. Turano's son John, 17, suffered serious but not fatal bullet wounds to his back.

Police immediately began searching for longtime Galante friend Angelo Prisinzano, 73, who reportedly left the restaurant just before the shooting started, as well as Baldassare "Baldo" Amato and Cesare Bonventre, both 28, who were present at the time of the shooting but quickly fled - apparently unharmed - following it. Authorities later concluded that Prisinzano was also targeted in the attack but narrowly escaped.

(Angelo Prisinzano died of natural causes about one week after the assassination of Galante. Cesare Bonventre was reported missing in early April of 1984. His mutilated remains were reportedly found soaking in drums of acid a month later. Baldassare Amato became an important figure in the Bonanno Crime Family. He was sentenced in October 2006 to life in prison following a federal conviction on racketeering and murder charges.)

The sentencing of Baldassare Amato was covered in the December 2006 issue of MobNews Digest.