On this date in 1902...
Fourteen-year-old John Mulqueen and three of his friends slid down the steep grassy slope from Shore Road in the Bay Ridge section of Brooklyn. As they moved through trees and tall weeds toward the rocky shore of New York Bay, they began removing their clothes. The sun had set on a steamy Wednesday, July 23, 1902, and the boys were ready for a cooling swim.

Before heading into the water, the four teens fanned out, looking for remote hiding places for their clothes. None wanted to take the chance of falling victim to the “chaw beef” trick. That practical joke involved tying tight knots into the shirt and pants of a bather. When the victim came out of the water, he would need to use teeth along with fingers to get the knots out. Onlookers would cheer, “Chaw beef, chaw beef...,” as the knots were undone.

Young Mulqueen carried his garment bundle off into the grass, where he spotted what looked to be a large and very full potato sack. The boy found the object irresistible. He pulled a small knife from his clothes and put a slit into the sack. Underneath, he found another container, which appeared to be made of tougher material.

He gathered his friends and began slicing into the inner liner. When the dusk light fell upon a portion of the sack’s contents, the boys recoiled. A man was inside, naked and lifeless. 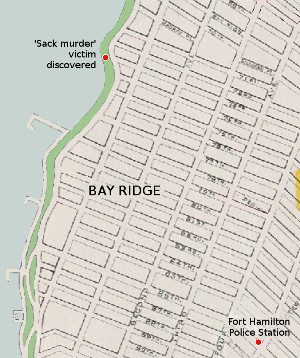 The boys, stunned by what they saw, retreated and hastily put their clothes back on. Mulqueen, who lived a few blocks away at 321 Seventy-fourth Street, decided that the police were needed. He suggested that two of the group leave at once for the Fort Hamilton Police Station on Eighty-sixth Street near Fifth Avenue. The other two should keep watch on the area, he said. Joseph Donahue of 346 Seventy-fourth Street, Robert Pearsall of 1671 Third Avenue and William Chambers of 206½ Chambers Street all agreed that Mulqueen’s plan was sound. However, none of the boys wished to be left behind with the bagged corpse. They decided on an alternate plan – they would all go together to fetch the police.

By road, the distance between their favorite swimming spot and the station was about one and a half miles. But the layout of Bay Ridge in 1902 – sprawling farms, large vacation estates and smaller homes surrounded by woods through which paths had been carved – allowed a more direct route and cut the trip to the station by about a third.

Desk Sergeant Hughes somewhat reluctantly listened to John Mulqueen’s story. He doubted that the boys had stumbled upon a corpse in a bag of potatoes, but dispatched three police officers with Mulqueen and his friends in a patrol wagon to investigate.

The Brooklyn officers followed Mulqueen’s direction to the sack and quickly verified his tale. Unprepared to conduct an investigation on the dark shore, the officers decided to take the large bundle back to their station. With considerable difficulty, they dragged the sack and its contents up the twenty-foot-high slope to the Shore Road, loading it into the patrol wagon.

A thorough examination of the corpse and its wrappings was conducted under the lights at Fort Hamilton Station. The outer covering was indeed a large potato sack. Stenciled on it were the words, “Paton’s Selected Scotch – 168 lbs.” Police determined that the inner lining had been assembled from some floor matting sewn into the shape of a bag. Another bag was found over the head of the victim. Around that was wrapped a few pages from the Sunday, July 13, issue of the New York Times.

Despite the date of that newspaper, investigators could see that the victim had been dead not longer than twenty-four hours. He was a fairly large and powerfully developed man, with a height of about five feet and ten inches and a weight approximated at two hundred and forty pounds. He had gray eyes, black hair and a lighter color mustache. Police guessed that he was roughly thirty eight years old.

The cause of death was readily apparent. A deep gash ran across the victim's throat from ear to ear, nearly disconnecting the head from the torso. The coroner noted that only a single cord of neck muscle remained intact. The victim had bled out quickly, possibly losing as much as a gallon of blood in the moments following his murder.

Two other short stab wounds were found on the neck and face. A number of other wounds on the body were noted. The victim’s left thumb and forefinger were missing, the result of a much older injury. Several scrapes looked to be defensive injuries. Bruises were visible all over the body. Several larger bones had been broken. The coroner theorized that the broken bones might have occurred after death, as the body was stuffed into the floor mat bag. Heavy twine had been used to fold the body in half by joining the upper spine to the lower legs. This, too, was seen as a measure taken to allow for easy disposal of the victim.

Detectives and patrolmen returned to the shore with lanterns to search for additional clues. They discovered another potato sack, which held a black suit, a shirt, shoes and a derby hat. The suit and shirt had been cut into large strips and were stained with blood. With the clothes, the detectives found two folded documents. One was a bill of lading for a tomato-based product imported from Italy. The other was a notice of eviction relating to a commercial establishment at 165 Columbia Street. Though the victim remained nameless, the documents suggested he was an Italian merchant doing business on Columbia Street.

Further up the slope from the spot where the body had been found, Officers Burns and White noted that a section of fence had been knocked over and several saplings crushed. From the available evidence the detectives concluded that the two potato sacks had been driven to Shore Road and thrown onto the slope from a vehicle. They speculated that the perpetrators of the crime, believing the water was closer to the road than it actually was, expected the sacks to roll out into the bay. Area residents reported seeing a wagon stopping briefly in the area during the night.