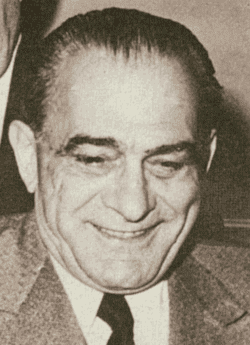 Leaders of Mafia crime families based in the eastern U.S.  assembled at Midtown Manhattan's Hotel Diplomat, 108-116 West 43rd Street, on June 24, 1946, for a welcome home banquet in honor of Vito Genovese, according to Dom Frasca's book King of Crime (New York: Crown Publishers, 1959). Pittson, Pennsylvania, boss Santo Volpe was the first to greet the guest of honor, Frasca wrote. Reportedly the most senior of the crime bosses in attendance, Volpe led "Don Vitone" to a leather chair at the head of the table. The remaining twenty-seven Mafiosi, standing around the table, offered their greetings and congratulations.

Genovese actually had been home in the United States for a while by then. He returned from Italy June 1, 1945, in the custody of the U.S. Army Provost Marshal's Office and was turned over to New York prosecutors to stand trial for ordering "hits" on Ferdinand "the Shadow" Boccia and William Gallo in 1934. Boccia was murdered, but Gallo survived. (Genovese also was suspected of calling for the 1943 murder of anti-Fascist editor Carlo Tresca.)

As underboss to Salvatore "Charlie Luciano" Lucania in the summer of 1936, Genovese was poised to take control of a sprawling and highly profitable crime family when Lucania was convicted of compulsory prostitution and given a lengthy prison sentence.

Genovese was naturalized a U.S. citizen in November 1936, but almost immediately obtained a passport to leave the country, as he feared prosecution for the Boccia murder. He served the Fascist regime of Benito Mussolini during World War II but then worked as an interpreter for the occupying American forces beginning in January 1944.


While he was away, Brooklyn prosecutors built the murder case against Genovese and other crime family leaders, largely through the confession of Ernest "the Hawk" Rupolo, who took part in the attacks on Boccia and Gallo, and corroborating testimony of witness Peter LaTempa. On August 7, 1944, a Kings County grand jury indicted Genovese for homicide. That news was transmitted to military officials, and Genovese was arrested in Italy by the end of the month.

It took some time for the extradition process to begin. During that process, prosecutors' only corroborating witness, LaTempa, died in a prison holding cell of a mysterious drug overdose. Corroborating testimony was essential to the case, as state law would not permit conviction based solely on the testimony of an accomplice in the crime.

Prosecutors went ahead with the case following Genovese's return. Genovese was arraigned for the Boccia murder in Kings County Court on June 2, 1946. Trial began on June 6. Rupolo stepped to the witness stand the next day and testified that he was hired by Genovese to eliminate Boccia and Gallo. William Gallo also testified. The state rested its case that day, and the defense immediately moved that the charge against Genovese be dismissed due to lack of evidence.

Judge Samuel Leibowitz (a former criminal defense attorney) dismissed the indictment and directed a verdict of not guilty. But he clearly wasn't happy about the situation. "I am constrained by law to dismiss the indictment and direct the jury to acquit you," the judge stated. "...You and your criminal henchmen thwarted justice time and again by devious means, among which were the terrorizing of witnesses, kidnaping them, yes, even murdering those who could give evidence against you. I cannot speak for the jury, but I believe that if there were even a shred of corroborating evidence, you would have been condemned to the chair."

Genovese was freed on June 10, two weeks before the Hotel Diplomat gathering reported by Dom Frasca.

Years of "government" work - first with Fascists and later with occupiers - apparently left Genovese with a large nest egg (or perhaps his colleagues gave him more than just greetings and food at the banquet). One month after the welcome home party, Genovese purchased a $40,000 seaside home at 130 Ocean Boulevard, Atlantic Highlands, New Jersey. The deal was reportedly made in cash.

Genovese once again became a key figure in the former Lucania Crime Family.

A decade later, following a 1957 botched murder attempt that left a lasting impression on boss Frank Costello's mind as well as his scalp, Genovese finally moved into the top spot of an organization that would from that time on be associated with his name.