A trio of bullets for Little Augie

It didn't make much of a splash but eighty-four years ago today, the body of Little Augie Marino, 23, said to be a gangster affiliated with the Roma - Smaldone gang of Denver, Colorado, was found three bullets heavier. He had been taken for a ride and his body dumped. Denver mob boss Joseph Roma was killed the previous February so perhaps Little Augie's services weren't appreciated by the new management.

Was back on this date in 1933 that Tinsel Town lost one of their, if not thee, top bootlegger. Booze baron Harry Meagher, said to have a number of Hollywood stars as both friends and customers,was pulling up to his home when neighbors heard a series of pops and then a crash.

See, what happened was somebody gave Harry the works while Harry was pulling up to his abode, then this somebody, who was in the passenger seat at the time, turned his gun and killed James North who was in the back seat. Or did he give North the works first and then kill Meagher? Either way the result was the same. The car jumped the curbed and crashed into a light post. The killer got away while Meagher and North stayed put.

Why did Harry get dead? Three reasons were offered so you can pick one:
1) Gangsters from Chicago (or other eastern parts) were muscling in on the lucrative L.A. scene and it was just to bad for the local boys.
2) Harry himself was expanding into Arizona and Utah and them local fellas there weren't to keen on the idea.
3) It was an attempted robbery gone wrong.

PS
That third guy in the headline? He was an ex-boxer named Mickey Arno. He was killed about the same time and his body was found under a bridge near Long Beach. Police thought he may have been an associate of Meagher, then, after awhile, they thought that maybe he wasn't an associate of Meagher's.  Could of just been one of the coincidences.
Posted by Patrick Downey at 8:54 AM No comments:
Email ThisBlogThis!Share to TwitterShare to FacebookShare to Pinterest
Labels: 1933, Dead gangster, Harry Meagher, Hollywood, James North, Los Angeles, Mickey Arno, on the spot, Patrick Downey 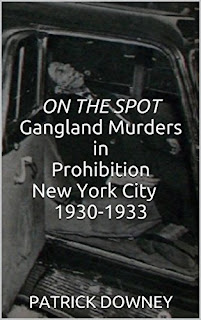 No not that Paul, but Paul Robinson said to be a Los Angeles gangster, who was bumped off on this date back in 1932. Initially police believed that he was involved in some sort of  gangland feud. This stemmed from the fact that Robinson's bullet riddled corpse was found in a recently dug ditch near a San Mateo golf course.

Police determined that Robinson had been killed in San Francisco and his body taken to the golf course and dropped into the ditch. (I suspect a "hole in one" joke is applicable here so if you have one, by all means leave it in the comments) After Robinson's body was deposited his slayer fired ten more shots into him. The dead man's auto was then parked near San Francisco's Presidio district and set on fire.

Subsequent investigation showed that Robinson had left L.A. along with a confederate named E.P. Andrews alias Gene Shelton, whom the authorities felt was the one who did in Robinson. On the following December 8, Andrews was traced to the town of Banning where he escaped in his wife's car amidst a shootout with police. He didn't bother waiting for his wife who was taken into custody.