August 6 has been a bad date
to be a Pittsburgh Mafia boss.

On that date in 1929, thirty-nine-year-old underworld chief Stefano Monastero was murdered as he went to visit an ailing henchman at St. John's General Hospital on Pittsburgh's North Side.


Calogero Spallino (also known as Sparlino), free on bail as he awaited trial for an attempt on the life of Monastero rival Joe "Ghost of the Hill" Pangallo, went into St. John's for appendix surgery. Stefano Monastero drove to the hospital in an armored automobile, featuring steel plating and three-quarter-inch bulletproof glass windows. But he had to leave the protection of the vehicle to enter the building. When he emerged, shotguns erupted from a nearby parked car.

Monastero was knocked down by the shots. One of his assailants then approached with a handgun and fired into the boss's head to finish the job. The murder remained unsolved, but Joe Pangallo was generally believed responsible.

Stefano Monastero rose to power about 1925, assuming control of a regional underworld network in western Pennsylvania assembled largely by the linked Calderone and Landolina families. Monastero and his older brother Salvatore ran a produce business but earned considerably greater income through North Side stores that provided ingredients and equipment for bootleggers. Monastero had been fighting a gang war with Pangallo since about 1927. (In September of that year, the local press reported on a car bombing that threw Pangallo twenty feet into the air but failed to kill him.)

Monastero's Mafia pedigree was noteworthy. He was the son of Pietro Monastero, a Caccamo native who was among those charged with the 1890 Mafia murder of Police Chief David Hennessy in New Orleans. Stefano Monastero was very young, living with his mother and brothers in Sicily, when Pietro Monastero was killed by a lynch mob at Orleans Parish Prison in 1891. The family relocated to New Orleans following Pietro's killing and moved from city to city in the U.S. before settling in the Pittsburgh area.

On the same date three years later, recently installed Pittsburgh boss John Bazzano was called to a meeting of the nation's Mafia leaders on Hicks Street in the Red Hook section of Brooklyn. He was to answer for his involvement in the recent murders of Wilmerding, Pennsylvania, racketeers John, James and Arthur Volpe. Bazzano did not leave the August 6, 1932, meeting alive.

The Volpes, under the protection of New York underworld power Vito Genovese, were gunned down within Bazzano's Rome Coffee Shop on Pittsburgh's Wylie Avenue on July 29. Genovese, suspecting that the Volpes were victims of an anti-Neapolitan conspiracy among Calabrian and Sicilian Mafiosi in Pittsburgh, New York and Cleveland (including Bazzano and Nick Gentile in Pittsburgh; Albert Anastasia, Joe Biondo and Vincenzo Mangano in New York; Frank Milano in Cleveland), assembled the disciplinary hearing for Bazzano.

During the meeting, the forty-four-year-old Bazzano did not deny responsibility for the murders of the Volpes. Instead, he called on other Mafia leaders to join in a war to exterminate the Neapolitans in their organization.

Bazzano's words and recent deeds presented a threat to the still-shaky underworld alliances that emerged from the bloody Castellammarese War concluded one year earlier. His punishment was immediate. He was gagged and tied with rope, while his body was punctured more than twenty times with ice picks. Some of the wounds reached his heart, causing a fatal hemorrhage. The body was found August 8, wrapped in burlap near the intersection of Centre and Clinton Streets in Red Hook. It could not be identified until relatives from Pittsburgh arrived in New York looking for Bazzano. 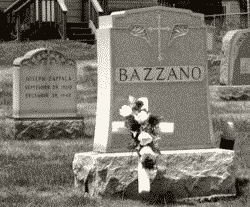 More on these subjects: