Eleven years and a fine for tax dodger Capone

Judge Wilkerson sentenced him to five years in federal prison on each of the felony convictions, with two of those sentences to run concurrently. He added a year in Cook County Jail for the two misdemeanors. Capone had already been locked up in county jail for contempt, after it was shown that he pretended to be ill in order to avoid appearing before a federal grand jury.

As he returned to county jail after sentencing, Capone was in an angry mood and threatened a reporter who tried to photograph him: "I'll knock your block off." Later he pleaded with newsmen to put their cameras away. "Think of my family," he said.

Capone was refused release on bail pending the legal appeals in his tax evasion case. He brought his request for bail to the U.S. Circuit Court of Appeals but that was denied on October 27. When his appeals were exhausted, with the Circuit Court's affirmation of his sentence in February 1932 and the U.S. Supreme Court's early May 1932 refusal to review his case, Capone was moved from Cook County Jail to Atlanta Federal Penitentiary. His ten-year federal prison sentence would allow his release on good behavior in seven and a half years. 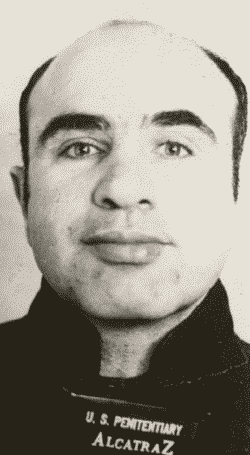 Capone's term in Atlanta was relatively brief. In the summer of 1934, he was transfered to Alcatraz Prison on the West Coast. His health deterioriated at Alcatraz. When he was freed from custody in November 1939, he was immediately placed in a Baltimore hospital for treatment of paresis. His final years were spent in retirement at Palm Island, Miami Beach, Florida. He died January 25, 1947.