According to Pistone's book, Donnie Brasco: My Undercover Life in the Mafia, the encounter occurred on July 28. Pistone wrote that the agents showed Napolitano a photograph of Pistone in the company of several fellow federal agents. As the photograph was shown, the agents asked Napolitano, "Do you know this guy? He's an FBI agent. We just wanted to tell you."

Napolitano had known and confided in Pistone - believing him to be jewel thief Brasco - for months. But he remained poised in front of the other agents and replied, "I don't know him, but if I meet him, I'll know he's an FBI agent."

Pistone could only have heard of this encounter second-hand. Fencl, who was actually there, recalled it differently for his testimony in the 2004 trial of Bonanno boss Joseph Massino. He placed the encounter two days later, July 30.

"I asked [Napolitano] if he knew Donnie Brasco and Tony Rossi, and he said that he did, and I told him they were FBI agents," Fencl testified. "I told him I wanted to make sure of his safety and that he was going to have a potential problem with the Bonanno Crime Family"

Fencl offered Napolitano his business card, hoping that he would contact Fencl and agree to cooperate with law enforcement. Napolitano refused, saying, "You know better than anybody that I can't take that, but I know how to get a hold of you."

According to Fencl, he brought along a photograph of Pistone and several other agents just in case Napolitano needed proof that the man he knew as Brasco was actually an agent. In his testimony, Fencl did not indicate whether the photograph was actually used.

Despite the government warning, Napolitano made no effort to protect himself. After Fencl, Kinne and Loar left the lounge, he scrambled to inform Mafia higher-ups of the possible infiltration and to locate the man he knew as Brasco. Napolitano was soon murdered by his underworld colleagues - under orders from rapidly rising Bonanno leader Massino - for taking the undercover agent into his orbit as a crime family associate. Late in the year, Napolitano was called to a meeting with bosses. He did not return. 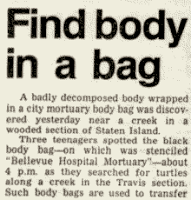 Picked up in Brooklyn by mobster Frank Lino, he was driven to a house in Staten Island and murdered in the cellar. According to later testimony, two gunmen were assigned to perform the killing. One fired a less-than-fatal shot, and the other's gun jammed. Before a fatal shot was fired, Napolitano was heard to say, "Hit me one more time, and make it good." In the summer of 1982, Napolitano's badly decomposed body, minus its hands, was found wrapped in a city mortuary bag in woods near a creek in western Staten Island. Identification of the remains took considerable time because of the decomposition. A medical examiner reporting to the scene of the body's discovery was unable even to determine its sex.

The Brasco operation began in 1976 as an effort to penetrate the "fences" who processed stolen goods for organized crime families in New York. Special Agent Pistone first encountered Bonanno members in front of a mob social club on Madison Street in lower Manhattan. He gained the trust of Manhattan-based Bonanno soldier Benjamin "Lefty" Ruggiero and his immediate superior Napolitano.

During the operation, Pistone participated in underworld rackets - fencing of stolen goods, gambling, loansharking - and learned of gangland murders. When pressure was put on him to participate in a murder, the FBI ended the operation. Through his undercover work, the FBI gained information on a Bonanno Crime Family civil war that included the assassination of leader Carmine Galante and the later killings of three rebellious group leaders, Alphonse Indelicato, Philip Giaccone and Dominick Trinchera. The Bureau also learned of relationships between elements of the Bonanno organization and crime families as far off as Florida and Wisconsin.

Donnie Brasco's true identity was publicly revealed for the first time in the federal racketeering conspiracy trial of Ruggiero and four other defendants in the summer of 1982. Judge Robert W. Sweet refused a prosecution request to allow the agent to testify only under his code name, finding that doing so would hamper defendants' ability to cross examine the primary witness against them. Pistone took the witness stand on August 2, 1982. His testimony focused on four of the five defendants. All four were convicted on August 27. The fifth defendant - charged on the basis of informant testimony - was acquitted. Ruggiero, then fifty-six, was sentenced to fifteen years in prison for racketeering conspiracy including three murders.