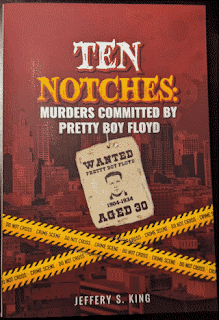 The author notes that, after Floyd's death in a shootout with law enforcement, his watch was found to be marked with ten notches. The FBI felt the notches correlated with the number of men Floyd had killed during his criminal career. His ten victims, including seven members of law enforcement, were slain between March 25, 1931, and the infamous Kansas City Massacre of June 17, 1933.

The author pays special attention to the Kansas City Massacre and to the work of FBI agent Melvin Purvis, who led authorities on a successful hunt for Floyd.

Ten Notches is 216 pages, including eight pages of photographs and four pages of bibliography. The work is footnoted. First released in late summer of 2022, it is available in paperback and Kindle e-book formats through Amazon.com.

Author Jeffery S. King, a former reference librarian for the Bureau of the Census and for the Washington, D.C., Public Library, has also written The Life and Death of Pretty Boy Floyd, The Rise and Fall of the Dillinger Gang and other true crime books.