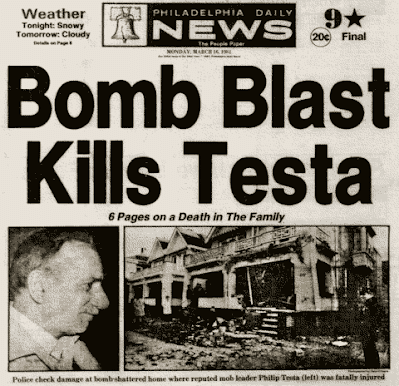 Just before three o'clock on Sunday morning, March 15, 1981, an explosion shook the Girard Estates neighborhood of South Philadelphia. Patrol cars sped to the home of regional crime boss Philip C. "Chicken Man" Testa, 2117 West Porter Street. Officers found that the blast had thrown bricks, mortar and concrete from the home's front porch into the roadway - some bits of brick reached the grounds of Stephen Girard Park across the street. The porch roof, torn apart, had collapsed. The force of the explosion forced the home's front door fifteen feet into the residence. 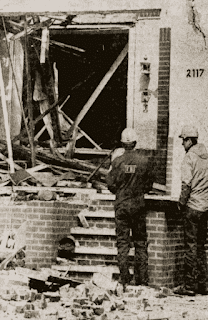 On the far side of a thirty-inch wide crater punched through the six-inch concrete porch floor, officers found fifty-six-year-old Testa, somehow still alive.[1]

The explosion left Testa's body burned and as badly torn as the clothes he wore. His lower body was mangled. One of the officers told the press, "[Testa] looked like he went through a giant paper shredder."[2] Testa, unconscious, was rushed to St. Agnes Hospital, about a mile away at 1900 South Broad Street. Doctors did what they could to bring the bleeding under control. At four-fifteen, Testa died of his wounds.[3]

Assistant Medical Examiner Halbert Filinger blandly reported that death had been caused by "multiple injuries" to Testa's "head, trunk, arms and legs."[4] Filinger could have added that a contributing factor was Testa's forty-year-old decision to pursue an underworld career.

Philip Testa was the second Philadelphia crime boss to be murdered within a single year. (See Philadelphia Mob leaders at mafiahistory.us.) His predecessor and close friend Angelo Bruno was fatally shot on March 21, 1980. Since the Bruno assassination, the dead bodies of Philly mobsters had been regularly turning up. Authorities wondered if the violence was the result of internal rivalries, frustration over crime family rules against narcotics trafficking or efforts by aggressive New York Mafia bosses to seize control of Philadelphia and southern New Jersey rackets.[5]

Investigators at Testa's residence concluded that a powerful bomb packed with nails exploded behind a short brick wall that edged the two-story duplex's front porch.

Testa, who lived alone since the 1980 death of his wife, arrived there after finishing a night's work at his business, Virgilio's Restaurant, 5 Bank Street in the Old City District. He double-parked his black, Chevrolet Caprice Classic in the street, climbed the steps onto the porch, where the bomb was hidden in shadows. Testa opened the home's storm door and was beginning to put a key in the front door lock when the bomb was detonated.[6]

The bomb must have been set off by a sort of remote control, investigators determined, and the person responsible must have been within sight of the porch at that moment.[7]

Killings within the Philly Mob continued after Testa was laid to rest at Holy Cross Cemetery in the borough of Yeadon.[8] Some of the homicides were determined to be the result of a vendetta pursued by Testa's son Salvatore.

When Casella attempted to take over the organization, Nicodemo Scarfo and his allies in New York forced Casella out of Philadelphia and into a Florida retirement.[10]

Narducci, forty-nine, was shot to death in front of his South Philadelphia home on January 7, 1982. Informer Thomas DelGiorno later told authorities that Salvatore Testa was personally involved in the Narducci murder and made sure Narducci saw who was taking his life.[11]

On the one-year anniversary of the Testa bombing, Rocco "Rocky" Marinucci, thirty, owner of Pop's Pizza in South Philadelphia, was found dead in a pile of debris left at a parking lot, South Eighth Street and Tasker Street. Marinucci, previously a driver for Casella, had been questioned after the bombing at Testa's home, as some witnesses reported seeing a black van like one he used speeding away from the scene just after the explosion. Police discovered that Marinucci had been beaten as well as shot. They found three large firecrackers stuffed in the mouth of his corpse and interpreted that as a symbolic link to the 1981 bombing.[12]

In September 1983, Theodore DiPretoro, twenty-three, already serving a life prison sentence on another matter, confessed to participating in the Testa bombing with Marinucci.[13]

A year later, reportedly on orders from boss Scarfo, twenty-nine-year-old Salvatore Testa was shot to death, his body dumped beside a road in southern New Jersey.[14]

6- "Bomb kills mob boss Testa"; Sutton, et al; Lawlor, Julia, Jack McGuire and Joe O'Dowd, "Suspect in Testa slaying murdered," Philadelphia Daily News, March 16, 1982, p. 3. The Chevrolet was reportedly registered to his son. The restaurant was conducted in the name of his daughter. Testa and his son were the owners of the restaurant building, and Testa used a back room as his personal office.