NYC revolutions in policing and in crime

Chilling and thought-provoking, John Oller's Rogues' Gallery (available September 21, 2021, in hardcover and ebook formats) is an epic saga of two revolutions playing out on the streets of New York City during the Gilded Age, each one dependent on the other. 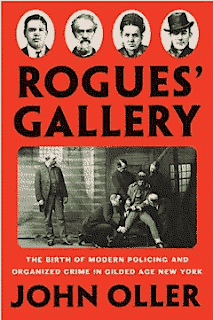 For centuries, New York had been a haven of crime. A thief or murderer not caught in the act nearly always got away. But in the early 1870s, an Irish cop by the name of Thomas Byrnes developed new ways to catch criminals. Mug shots and daily line-ups helped witnesses point out culprits; the fames rogues' gallery allowed police to track repeat offenders; and the third-degree interrogation method induced recalcitrant cooks to confess. Byrnes worked cases methodically, interviewing witnesses, analyzing crime scenes, and developing theories that helped close the books on previously unsolvable crimes.

Yet as policing became ever more specialized and efficient, criminals found new ways to ply their trade. Robberies became bolder and more elaborate, murders grew more ruthless and macabre, and the street gangs of old transformed into hierarchical criminal enterprises, giving birth to organized crime, including the Mafia. As the decades unfolded, corrupt cops and clever criminals at times blurred together, giving way to waves of police reform at the hands of leaders like Theodore Roosevelt.

With impeccable research that leaves no stone unturned, Oller dispels the many myths that have survived with these stories, while proving that truth is often stranger than fiction. Rogues Gallery is a colorful and captivating history in the bustling streets of Old New York, from the beginnings of big-city police work to the rise of the Mafia. With its extremes of plutocratic wealth, tenement property, and rising social unrest, the story of crime and punishment in New York's Gilded Age echoes for our own time.

The principle text, maps and images of Rogue's Gallery consume about 400 pages. An additional 80-plus pages is used for endnotes and bibliography. The index runs 19 more pages. The book is being released through the Dutton imprint of Penguin Random House. As of this writing, preorder price on Amazon.com is $27.99 for hardcover and $16.99 for Kindle-compatible ebook.