[Disclaimer: The author provided me with several revisions of Colorado's Carlino Brothers before publication. I contributed edit suggestions and provided a foreword to the book.  - TH.]

A decade ago, Mountain Mafia: Organized Crime in the Rockies by Alt and Wells first put the Colorado underworld on the map. Now, author Sam Carlino has provided the map with important connections between Denver and Pueblo Italian-American racketeers and national organized crime leaders. 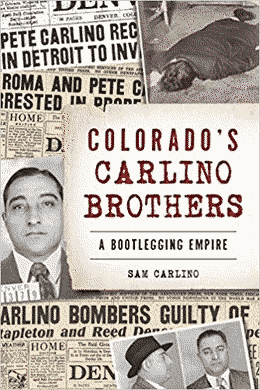 His just-released book, Colorado's Carlino Brothers: A Bootlegging Empire (The History Press), is at once an intimate family portrait and a detailed Mafia history. The author deftly tracks the development of the regional crime family before and through the Prohibition Era, revealing its proper place in the national scene, while providing personal insight into his ancestors, who were members and leaders of the organization. The author's unique perspective helps to fully develop and humanize the book's primary subjects, brothers Pete (the author's grandfather) and Sam, and reveals the often painful impact of their career choices on their extended families.

The book deals in depth with the career and murder of early Pueblo Mafia leader Pellegrino Scaglia, the long and violent Carlino-D'Anna rivalry, the successful infiltration of the Carlino operation by an undercover federal agent and the Denver police raid that exposed a budding regional bootlegging syndicate. It explores Pete Carlino's travels to Mafia home cities in the Midwest and the East in a seemingly desperate effort to strengthen his position at home. And it chronicles the tragic and bloody ends of the Carlino faction leaders.

But its most momentous revelation concerns a link between Pete Carlino and the powerful but short-lived New York City-based Mafia boss of bosses, Salvatore Maranzano.

The author uses some circumstantial evidence and a long-forgotten ("missing link") news source to build a convincing case for a connection between the two old-school "Mustache Pete" Mafiosi. For researchers of underworld history, this heightens the importance of the often overlooked Colorado underworld. It also adds greatly to the significance of the nearly simultaneous murders of Maranzano and Carlino, occurring 1,800 miles apart on September 10, 1931, and may be viewed as supportive of the legendary "Night of Sicilian Vespers" purge of Maranzano loyalists.

The author's deep affection for the subjects of the work and his joy at having discovered their true stories - long-closeted skeletons and all - are evident in his selection of family images, in his commentary in the "Introduction," "Conclusion" and "Special Thanks" sections of the book, and certainly in his decision to share with the reader the often praised Carlino family recipe for spaghetti sauce.