Rosario "Russell" Bufalino, longtime boss of the Northeastern Pennsylvania Mafia, departed this life on Friday afternoon, February 25, 1994, at the age of 90. He may have taken numerous underworld secrets with him. Bufalino was widely suspected of involvement in the disappearance of former Teamsters leader Jimmy Hoffa. He also was believed by many to hold information relating to the assassination of President John Kennedy and to the CIA's efforts to remove Cuban dictator Fidel Castro.

A resident of Kingston for much of his life, Bufalino passed away at ten minutes after two in the borough's Nesbitt Memorial Hospital. The cause of death was not released. Relatives kept secret their plans for Bufalino's funeral, irritating state and federal investigators who wanted to document and film the individuals attending it. 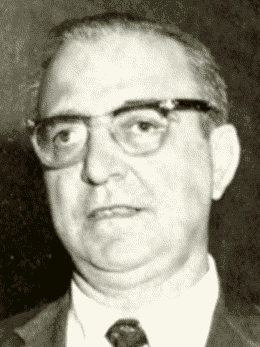 Born October 29, 1903, at Montedoro, Sicily, Bufalino was taken to the United States as a baby with his mother Christina Bucceleri Bufalino and several siblings. His father Angelo was already living in the Pittson area of Pennsylvania. Following the deaths of his parents, Bufalino and two sisters were shuttled back and forth across the Atlantic by family members. He and one sister ended up in 1914 with an older brother in Buffalo, New York (who was close to Magaddino underboss John Montana), while the remaining sister was deported for medical reasons. As a teen, Bufalino worked as an automobile mechanic.

Bufalino married Caroline Sciandra at Buffalo in the summer of 1928. The newlyweds subsequently moved to Endicott, New York, and Pittston, Pennsylvania, before settling in Kingston. They both had relatives in the region. Bufalino became involved in the garment industry and held financial interests in the Penn Drape & Curtain Company and the Alaimo Dress Company.

This was a departure from the pattern of earlier underworld-connected Montedoresi in the Luzerne County coal country, who had become leaders both in coal mining operations and in the coalminers' labor unions. Bufalino's early roles in the regional Mafia, known as the "Men of Montedoro" because of the dominance of the Montedoresi, are uncertain.

Bufalino likely succeeded to the leadership of the Men of Montedoro Mafia following the 1949 death of John Sciandra. But he was not really noticed by law enforcement until the Apalachin convention of 1957.

Bufalino's crime family was reported to be closely aligned with the Genovese Crime Family of nearby New York City. Bufalino spent much of his time in New York and is believed to have aided Mafiosi from that area in setting themselves up in non-union garment manufacturing businesses in Northeastern Pennsylvania. Bufalino also appeared to have business interests in Florida and Cuba.

There were reports of a visit to Cuba by Bufalino in November 1951. Documented trips to the island nation in late 1955 and spring 1956 later caused serious legal problems for the crime boss because he improperly claimed U.S. citizenship upon his reentry.

Authorities were confused by crime family relationships following the 1957 Apalachin convention. Due to the proximity of convention host Joseph Barbara's Apalachin estate to Scranton, Pittston, Wilkes-Barre home territory of the Northeast Pennsylvania Mafia, state and federal investigators decided that Barbara was a regional crime boss and Bufalino was his underboss. (This was stated in the 1970 report of the Pennsylvania Crime Commission.) It now appears, however, that Barbara was a remote lieutenant for the Magaddino Crime Family based in Buffalo, New York, while Bufalino was boss of his own organization.

As federal investigators looked into Bufalino after Apalachin, they discovered documents relating to his earlier returns from Cuba. In April of 1958, the U.S. Immigration and Naturalization Service ordered him deported as an undesirable alien. Years of legal appeals followed.

(Some writers have insisted that Bufalino developed a close personal relationship with Cuban dictator Fulgencio Batista in the late 1950s and worked to return Batista to power after Fidel Castro's revolution. Some connect these claims to incidents relating to Hoffa and the Kennedys. There even have been suggestions that Bufalino personally fled Cuba just ahead of Castro's advancing army at the start of 1959 and may have watched the failed 1961 Bay of Pigs invasion from a ship off the Cuban coast. Given Bufalino's ongoing problems with the INS deportation order, these claims seem far-fetched. It would have been extremely unlikely that Bufalino would have risked setting foot outside the country in this period for any reason at all.)

Late in 1959, Bufalino was among the more than 20 Apalachin meeting attendees to be convicted of conspiring to keep the purpose of the meeting from investigating agencies. In January 1960, Bufalino and fourteen co-defendants were sentenced to serve five-year terms in prison. Others were sentenced to lesser terms. The judge permitted the defendants to remain free on bail pending their appeals. Nearly a year later, an appeals court threw out the convictions.

Bufalino remained virtually untouched by law enforcement until his later years. Near the end of 1969, he was indicted in connection with the transport of stolen televisions across state lines. He was acquitted in 1970 and complained to the press about law enforcement harassment and wiretapping. He was then charged in spring 1973 with engaging in extortion in the cigarette vending machine business. A jury in Buffalo, New York, acquitted him.

At about that time, the U.S. was poised finally to deport him to his native Italy, but Italy halted the plan, refusing to issue the paperwork necessary for his return.

Another extortion case resulted in another acquittal in 1975. In the same period, Bufalino was mentioned but not charged in connection with the disappearance and likely murder of Hoffa, who was attempting to regain power in the Teamsters union. However, in the summer of 1977, Bufalino was convicted of extortion. His first documented experience inside a prison occurred in summer 1978, when his legal appeals concluded and he became an inmate at Danbury, Connecticut, Federal Correctional Institution. He served three years of the sentence before being paroled on May 8, 1981.

During his time in prison, the crime family of Northeastern Pennsylvania was reportedly managed by Edward Sciandra (nephew of former boss John Sciandra).

Less than half a year after his release from prison - at a time when his underworld organization was regarded as the most powerful in the State of Pennsylvania - he was charged with conspiring to kill a federal witness back in 1976. He was convicted and sentenced to ten years in Leavenworth Federal Penitentiary. He was released in May 1989, after serving six years and eight months of that term. The end of the sentence was served in the federal prison hospital at Springfield, Missouri, as Bufalino's health began to decline in 1987 and a transfer was deemed necessary.

Bufalino spent the final two years of his life in a Kingston nursing home. Following his death, management of the regional crime family fell to Edward Sciandra and former Bufalino driver and confidant William D'Elia. 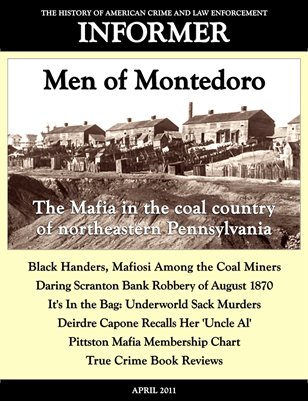