He Done Her Wrong

When one thinks of the Golden Age of Hollywood, one doesn’t normally think about crime but Hollywood’s top stars lived with a constant fear that they could become the victims of armed robbers, extortionist or kidnappers. One of the most preyed upon movie stars was Mae West. She was the victim of both extortionists and armed bandits. Regarding the latter, in 1932 Mae was set up by a man named Harry Voiler, whom she considered to be a friend. Voiler was the manager of famed speakeasy hostess Tex Guinan and had ties to Chicago’s underworld. He moved to Hollywood in 1932 along with Guinan in search of Hollywood riches.

A bad guy at heart, Voiler just couldn’t help himself when it came to easy dough. Because Mae’s limousine was in the garage Voiler took to chauffeuring the actress around. On one occasion Mae opened her purse and pulled out a wad of $3,400. This plus the thousands in jewelry that Mae was always draped in was too much for Voiler to ignore. Knowing that he would be driving her around that night he got in touch with a couple of Los Angeles hoodlums and set up a robbery.  That evening, September 28, Voiler picked up Mae at the Paramount Studios and drove her and her manager back to Mae’s house. As Mae’s manager ran up to her apartment to feed her pet monkey, a man stepped up to the car and jerked open Mae’s door. With a gun hidden under a handkerchief, he demanded Mae’s purse and her jewelry.  Once he got what he was after he he told Voiler to take off.
Mae wanted to go to the police but Voiler said that she should wait to see if the robbers try to ransom back her jewelry, he even volunteered to act as her go between,  so the star agreed to wait. In the following weeks Voiler said that the bandits were willing to negotiate and that he would have to fly to Arizona to meet with them, so Mae sent him. Once there he called Mae and said that they had all her jewelry and were demanding $3,200 for it and were not willing to negotiate. Mae refused. With his plan backfired, Voiler was forced to sell the stuff elsewhere.
After the incident with Voiler Mae went to the police and, although it took over a year, Voiler was finally uncovered as the master mind behind the crime. Unfortunately for Mae, by that time, he was back in Chicago and the police were unable to extradite him. 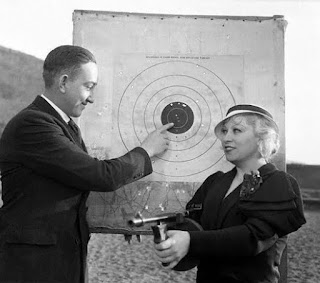 Mae West shows the underworld that they won't be able to mess with her.