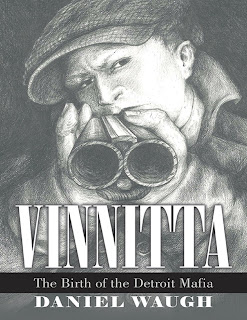 Sam Perrone article on gangsterreport.com
Posted by Daniel Waugh at 9:59 AM No comments:
Email ThisBlogThis!Share to TwitterShare to FacebookShare to Pinterest
Labels: 1920, Daniel Waugh, Detroit, January 12, Mafia, Perrone, Russo, St. Louis
Daniel Waugh
I am a freelance writer who specializes in early 20th century true crime and military history. My published works include Egan's Rats; Gangs of St. Louis; Off Color: The Violent History of Detroit's Purple Gang and Vinnitta: The Birth of the Detroit Mafia. I'm currently at work on a fifth book about a well-known and innovative gangster in Prohibition-era Chicago.

On Sunday, Jan. 12, 1969, police found a dead man behind the wheel of a '66 Cadillac convertible parked in the Los Angeles International Airport lot. There was a small-caliber bullet wound at the base of the man's skull. The man had been dead for a couple of days.

A local resident, departing the airport Saturday for a one-day flight, parked near the Cadillac and noticed the driver slumped over the steering wheel. When the resident returned Sunday night and found the Cadillac and its driver in the same position, he alerted police.

No identifying papers were found on the body. Police used fingerprints to identify the victim as forty-six-year-old former Cleveland robber/safecracker Julius Petro. They learned that Petro had borrowed the Cadillac from a woman friend two days earlier.

Petro had survived at least two brushes with death during his young adult years in Ohio. He was sentenced to be executed for murder, but won a retrial on appeal and in 1948 was acquitted of that murder. Months later, he and four accomplices held up the Mafia-linked Green Acres casino outside of Youngstown, Ohio. The robbers took about $30,000 in cash and jewels, including a large diamond ring belonging to regional gambling boss Joseph DiCarlo. Shots were exchanged between the robbers and casino guards. Petro suffered gunshot wounds to his right chest and arm, but managed to recover.

An early 1950s bank robbery conviction sent Petro to prison for about thirteen years. Following his May 1966 release, he joined a wave of Cleveland-area racketeers relocating to California. Initially serving as an enforcer for a gambling operation, in a short time Petro was viewed as a threat to displace racket overseer John G. "Sparky" Monica. The killing of Petro eliminated that threat.

Authorities were unable to solve the Petro murder until about a decade later, when Raymond W. Ferritto became an informant and confessed that he performed the killing for Monica. He said he shot Petro on January 10, 1969. Ferritto, a western Pennsylvania native connected with the Cleveland Mafia, also confessed to participating in the 1977 bombing murder of Cleveland mobster Danny Greene.

Monica denied any involvement, but he was indicted for hiring Ferritto and a man named Robert Walsh to kill Petro because Petro was extorting money from him. Prosecutors seeking to bring the gambling boss to trial encountered a number of obstacles that delayed for years a preliminary hearing in the case. A Monica arraignment was finally set for Monday, February 22, 1982. Just a few days before that, however, fifty-six-year-old Monica, free on bail, died in a traffic accident on US-70 near Tularosa, New Mexico.

Investigators were able to track some of Monica's movements and guessed that he was returning from a visit to a girlfriend in Odessa, Texas, when the highway accident occurred.