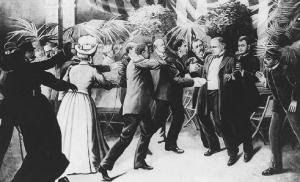 On this date in 1901, US President William McKinley was shot at the Pan-American Exposition in Buffalo, NY by anarchist Leon Czolgosz. President McKinley died eight days later from his wounds. Czolgosz was subdued at the scene by the crowd and taken into custody. He was tried in NY State court and convicted of murder. He was executed in the electric chair at Auburn Prison on October 29, 1901.

This video is of a reenactment of the execution of Leon Czolgosz. The original film was shot by Thomas Edison in 1901.

University at Buffalo: Leon Czolgosz and the Trial

Wikipedia: Leon Czolgosz
Posted by John DuMond at 7:29 AM No comments: Links to this post
Email ThisBlogThis!Share to TwitterShare to FacebookShare to Pinterest
Labels: 1901, Anarchists, assassination, Buffalo, Czolgosz, John DuMond, Leon, Pan-American Exposition, William McKInley
John DuMond
Writer of fiction and true crime. He is the author of Under the Wall: The True Story of the 1945 Tunnel Escape from Eastern State Penitentiary and Over the Wall: The True Story of the 1947 Escape from Holmesburg Prison. He is an Army veteran and a retired Air National Guard Master Sergeant. He currently lives in Albany, NY where he works as an investigator.
Older Posts Home
Subscribe to: Posts (Atom)