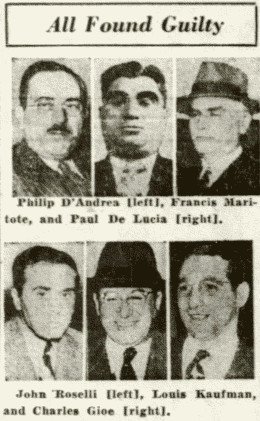 Evidence of some lingering hostility

On this date in 1955, a former Chicago Outfit member living under an assumed identity in Arizona was killed in a car-bombing. The fatal explosion was linked to an extortion racket exposed more than a decade earlier.

"Fat Willie" Bioff, a native of Chicago's West Side, relocated to southern California before World War II and became an aide to International Alliance of Theatrical and Stage Employees (IATSE) union President George Browne. As he became a union official, Bioff already had a reputation for violence (Chicago police suspected him of involvement in the murder of Wisconsin gang boss Jack Zuta) and for close affiliation with members of the Capone organization. In California, he remained in close touch with the Outfit's West Coast rackets overseer Johnny Roselli.

In the early 1940s, federal authorities became aware of an ongoing Chicago Outfit scheme to extort vast sums from movie companies through control of motion picture industry unions, and Bioff emerged as a central player in that scheme, the main link between the IATSE union and Chicago organized crime. Word leaked from federal grand jury proceedings in New York City that studio executive Joseph Schenck was revealing the extortion scheme.

Outfit leaders, trying to assess the damage of the Schenck testimony, quickly got in touch with Bioff through Roselli. Bioff's response to the news - "Now, we're all in trouble" - concerned his higher-ups in the mob. Outfit leaders feared that Bioff would make a deal with the federal prosecutor and reveal their connection to the racket. The underworld bosses wanted to kill Bioff in order to resolve the issue, but Frank "the Enforcer" Nitti talked them out of it. Nitti convinced them that Bioff was a "stand-up guy" and could be trusted to keep his mouth shut.

Bioff and Browne were convicted in November 1941 of extorting more than half a million dollars from movie studio bosses at Paramount Pictures, 20th Century Fox, Warner Brothers and other companies during the 1930s. (Bioff later admitted that the total profit was more than a million dollars. The figure was subsequently inflated in the press to $2.5 million.) Bioff was sentenced to ten years in prison. Brown was sentenced to eight years. Each man was fined $20,000.

While in custody, Bioff betrayed his underworld colleagues and provided evidence to investigators. He confessed that he had arranged annual studio payments ranging from $25,000 to $50,000, depending on the size of the studio, and revealed that the racket was directed by a group of crime figures. By cooperating, he earned a sentence commutation - he and Browne were released in 1944 - but he also incurred the wrath of the Chicago Outfit.

The other Outfit mobsters were successfully prosecuted and sentenced on Dec. 31, 1943, to ten years in prison. Gioe, Campagna, Ricca and D'Andrea received early paroles in summer of 1947. Many expected immediate action against the Outfit traitor Bioff. But years passed without any related news.

In 1955, all the past unpleasantness seemed forgotten. Bioff and his wife Laurie were living under assumed names (Mr. and Mrs. William Nelson) in Phoenix, Arizona. There seemed little threat of underworld retribution for Bioff's betrayal. Involved Chicago mobsters had long ago served their prison terms and completed their probations. Most of them were no longer among the living.

Nitti shot himself in front of witnesses immediately upon learning of the extortion indictments. Charles Gioe and Frank Maritote were shot to death in August of 1954. (The FBI determined that their murders were due to Johnny Roselli's suspicions that they had cooperated with federal authorities.) Phil D'Andrea and Louis Campagna had died, reportedly of natural causes, in 1952 and 1955, respectively. (Ricca, Pierce and Roselli lived into the 1970s. Ricca and Pierce died of natural causes, in 1972 and 1976, respectively. Roselli was the victim of an apparent gangland execution in the summer of 1976.)

Evidence of some lingering hostility was seen on the morning of Nov. 4, 1955: Fifty-five-year-old Bioff climbed into his pickup truck inside his home garage. As he stepped on the starter, an explosion suddenly shook the neighborhood.

According to a press account, "The blast threw Bioff twenty-five feet and scattered wreckage over a radius of several hundred. It left only the twisted frame, the motor and the truck wheels. The garage door was blown out, the roof shattered and windows in the Bioff home and several neighboring houses were broken. Jagged chunks of metals tore holes in the wall of a home 100 feet away. The blast rattled windows a mile away."

Bioff's body, minus both legs and a right hand, were found 25 feet from the explosion.

A representative of the local sheriff's office told the press, "I don't know whether this was a professional gangster job or not, but it certainly was an effective one."

Phoenix police had noted a visit to the city of Outfit leader Anthony Accardo a short time before the murder of Bioff but could not meaningfully connect the visit to the bombing. No one was ever convicted for Bioff's murder.

On this date in 1943, Chicago Outfit leader Frank Nitti responded to news of a federal indictment by sending his wife to pray a novena, getting himself drunk and then firing a bullet into his brain.


The indictment was not entirely a surprise. Chicago mob bosses were well aware that their plot to extort millions from the motion picture industry and theater projectionists had been exposed. Willie Bioff - hand-picked by Nitti to oversee the racket - and Bioff's more visible partners had already been convicted in federal court. And it was clear that federal investigators were not done. News from New York suggested that some mob big-shots in Chicago were likely to be indicted. It seemed certain that Bioff was aiding the investigators, but the extent of the damage was not known until March 19, 1943.

Nitti had bet his reputation - and, likely, his life - on Bioff's reliability. When the extortion plot first came to light with complaints that mobsters controlled the International Alliance of Theatre and Stage Employees (IATSE), Outfit leaders contemplated severing their most dangerous connection to IATSE by murdering Bioff. Bioff reportedly survived only because Nitti opposed the idea.

On the morning of March 19, attorney A. Bradley Eben (a former assistant U.S. attorney) called the Nitti home at 712 Selborne Road in Riverside, Illinois, and provided his client with news of the indictments. Nitti made arrangements to meet with Eben at his law office that afternoon, but the mob boss actually had other plans.

Nitti told his wife of nine months, Antoinette (known as "Toni") Caravetta Nitto, to begin a prayer novena at Our Lady of Sorrows Church on Chicago's west side. (The Sorrowful Mother Novena was an enormously popular service at the church from the late 1930s into the 1950s.) She left the house at 1:15 that afternoon.

Nitti was next seen by railroad employees at about three o'clock, as he staggered along the Illinois Central tracks near Harlem Avenue and Cermak Road, less than a mile from his Selborne Road home. As the railroad men called out to him, the intoxicated Nitti leaned back against a chain-link fence, drew a handgun and fired it twice, sending bullets through his hat. Positioning the weapon more carefully, he then fired a third shot. The slug entered the right side of his head near his ear and traveled upward, lodging in the top of his skull.

When police arrived, they found Nitti's driver's license and Selective Service draft card - both made out in the name Frank Nitto - in his pockets. The documents gave his birthdate as Jan. 27, 1886. The draft card contained his Selborne Road address. The license, however, showed an address of 1208 Lexington Street in Chicago, which belonged to Lucia Ronga, mother of his first wife, the late Anna Theresa Ronga Nitto.

Toni Nitto returned home about a half hour later. "The first I knew of what had happened was when [the police] came and told me he was dead," she later told the press. "I knew something was wrong. There were always strange men watching our house. He knew something was up, too. Frank wasn't well - it was his stomach, nerves I think. They were always after him. They wouldn't let him alone. They made him do this."

Toni's brother Charles appeared at the coroner's inquest to testify that Nitti had been dealing with a number of issues: "He was suffering with a heart ailment and he had stomach trouble. I think he was temporarily insane." Some sources indicated that Nitti was also suffering with physical pain from a serious gunshot wound suffered back in 1932 and with lingering emotional pain from the death of his first wife in November of 1940.

A federal informant provided a more direct explanation for Nitti's suicide: "It was that or be killed. [The Outfit] held Nitti responsible for the problem. Bioff has been his man and it was Nitti who had persuaded the group to withdraw the original 'hit' order on Bioff. It was felt that if they had killed Bioff earlier in the investigation, his death would have silenced most prospective witnesses."

Nitti's estate was valued at greater than $74,000. That was divided between the widow Toni and Joseph, Nitti's son by his first marriage.