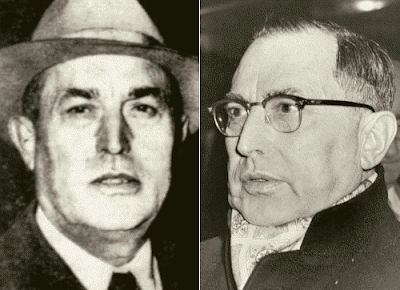 On April 30, 1970, Mafia boss Joseph Colombo responded to the arrest of his son, Joseph Jr., by organizing protest marches around the FBI headquarters in New York City.

A meeting to set up the march reportedly occurred within a half-hour of the 4:30 p.m. arrest. Just two hours after the arrest, about 20 people assembled outside the FBI offices at Sixty-Ninth Street and Third Avenue. Colombo, his wife and another son joined the protesters at 7 p.m.

The following day, the protest picket continued, swelling to several hundred marchers. Colombo said the demonstration was to call attention to anti-Italian discrimination and harassment by the FBI. Signs carried by the marchers objected to the fact that federal action against organized criminals focused on Italian-Americans.

At the time, Joseph Colombo Sr. was under indictment for tax evasion and lying to a state agency to obtain a real estate license. He had been installed as leader of the Brooklyn-based Profaci Crime Family when Profaci successor Joe Magliocco was forced to resign by the Mafia Commission.

Federal officials suggested that the Commission would not be happy with Colombo's attention-getting demonstrations.

Joseph Colombo Jr. was charged with extortion against a coin collecting business and with conspiracy to melt a half million dollars' worth of silver coins and sell the silver in higher value ingots. Press attention to his father's protest movement caused a mistrial in this case on Dec. 1, 1970. Colombo Jr. was acquitted by a jury in February 1971.

Over time, the elder Colombo's protests against federal law enforcement became a nationwide movement known as the Italian-American Civil Rights League. (There is some evidence that the league itself became a form of underworld racket. In June 1971, Colombo visited the Buffalo, New York, area and was said to be offering local Mafia bosses a $50,000 payment to permit his establishment of a league branch in Western New York.)

Colombo organized two league-related Italian Unity Day rallies at New York City's Columbus Circle. He was shot three times, once in the head, at the second rally in 1971. The hit (occurring two weeks after his visit to Buffalo) reportedly was ordered by other Mafia bosses. Colombo was left almost entirely paralyzed by the shooting. He lingered for years at the family estate in Blooming Grove, Orange County, New York, until his death in May 1978. The immediate cause of death was cardiac arrest, but doctors linked his passing with the gunshot wounds suffered seven years earlier.

In 2016, Colombo's son Anthony (author of Colombo: The Unsolved Murder) suggested that a conspiracy of federal and local law enforcement officials may have been responsible for the assassination of his father. Anthony Colombo said he was certain that Mafia bosses were not involved.

Read more about Joseph Colombo, including his involvement in the Western New York Mafia factional struggle:

DiCarlo: Buffalo's First Family of Crime, Volume II - From 1938 by Thomas Hunt and Michael A. Tona.

On this date in 1928, Cleveland police discovered a convention of U.S. Mafiosi at the Hotel Statler on Euclid Avenue and East 12th Street.

Scores of detectives and uniformed police officers quickly surrounded the hotel and raided rooms occupied by out-of-town visitors with Italian-sounding names. Twenty-three men were arrested as suspicious persons. Eighteen of them were found to be armed. Among the suspects were known crime figures from Chicago, New York, Buffalo, Tampa and St. Louis.


Police expressed their certainty that other organized criminals were staying elsewhere in the city. Rumors indicated that Chicago's Al Capone had been seen in the area.

Local authorities believed they had broken up a meeting called to settle feuds over Prohibition Era corn sugar, a necessary commodity for moonshining operations. They were mistaken. The bloody corn-sugar wars of the Cleveland underworld already had been resolved.

Some historians have suggested, quite wrongly, that the Cleveland gathering was the first formative convention of the U.S. Mafia (a number of writers have referred to the criminal society as the "Unione Siciliana"). Actually, a national Mafia network had been in place for many years, and meetings of Mafiosi occurred fairly regularly.

Other explanations have been offered. Some say that the convention was called to reallocate underworld rackets following recent gangland assassinations, to resolve underworld disagreements in Chicago or to recognize the ascension of Profaci to the rank of family boss. However, local or regional issues would not warrant the calling of a national convention. It appears far more likely that the convention's purpose was to recognize the U.S. Mafia's new boss of bosses Giuseppe Masseria.

At war with reigning boss of bosses Salvatore "Toto" D'Aquila since the dawn of the Prohibition Era, Masseria had assembled the strongest and wealthiest crime family in the country. The recent murder of D'Aquila on a Manhattan street left Masseria's appointment as boss of bosses a mere formality. Though Masseria's own home base was in New York City, many of his kin resided in Cleveland, and Masseria allies in Cleveland had recently defeated a pro-D'Aquila faction there. The city would have been an entirely appropriate selection for a Masseria coronation.

Critics of this view note that Masseria and his allies were not among those taken into custody at the Hotel Statler. Of course, with much of his family in the area, there would have been no reason for Masseria to stay at any hotel. And police publicly expressed their disappointment that the hasty raid at the Statler allowed other conventioneers to get away.

Read more about the 1928 Mafia convention in Cleveland and other Cleveland underworld events in: