On this date in 1957, the American Mafia's convention at Apalachin, New York, was revealed by New York State Police.

As officers, assisted by agents of the federal Treasury Department, set up a roadblock and began taking a close look at the luxury automobiles parked at the secluded Joseph Barbara estate in Apalachin, dozens of Mafiosi darted out of the Barbara home and attempted to drive or run away from the scene. That suspicious activity permitted police to gather up the fleeing gangsters and take them in for questioning. Leading underworld figures from around the country were identified. It has been speculated that a number of other Mafia conventioneers escaped the notice of authorities merely by remaining within the house until police had departed.

The incident became a media sensation and prompted state and federal investigations. It ultimately compelled federal authorities - including FBI Director J. Edgar Hoover, who long resisted the idea of an vast criminal conspiracy - to recognize the existence of a nationwide Mafia network. 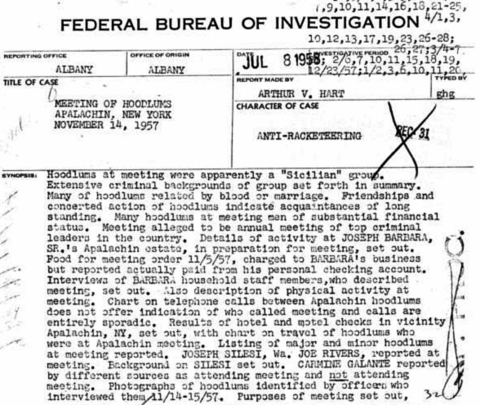