The Long Black Veil: The Widows of Frankie Yale

Before 1925, women associated with mobsters were rarely seen in the newspapers.  The mob funeral, which spawned a mid-1920s genre of photojournalism, would lift the blackout on mob women and their children.

With Prohibition, newspapers kept mob activity in the face of the law-abiding.  It was a time when everybody read the paper.  While gangland hits were making the front page, some vestiges of Edwardian morality kept most gangsters' molls away from the camera lens.  With the mob funeral, photojournalists at last found a tasteful way to portray the mystery women connected to gangland.

Summer in the city and gangland murders made for dramatic sendoffs.  By 1925, the war between the Torrio/Capone and Genna factions raged on Chicago's West Side.  On June 13th, Mike Genna of the alcohol-making Genna family was mortally wounded in a battle with police officers.  Angelo Genna had been killed three weeks prior on May 26th, and Anthony "Tony" Genna would die on July 8th. 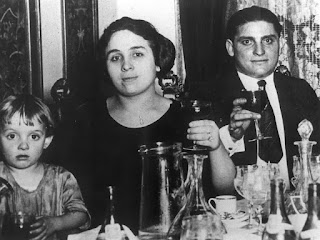 Aerial photos of the Genna corteges lining the streets showed a strange ink blot.  Closer inspection revealed a cluster of black-garbed women of the Genna family, bereaved of sons and lovers.

New York reporters would not be outdone by Chicago.  On July 1, 1928, Frankie Uale, whose ethnic name was often anglicized to "Frankie Yale," became the first recorded New York mob boss to die in a submachine gun ambush.  (The submachine gun was discovered to be unfired.  Some initial accounts attributed his wounds, which rendered him unrecognizable, to a shotgun blast.)

Yale, a strikebreaker, racketeer and fixer in the parlance of the day, was a Capone associate.  He is said to have been the assassin of  "Big Jim" Colosimo.  Uale was killed as he drove his expensive sedan down a Brooklyn street in broad daylight.  A car bearing Illinois or Indiana license plates fired six shots aimed at his head.  His car crashed through a fence and stopped in a yard as pedestrians ran for cover.

The press covered the lavish funeral from a unique angle.  Frankie Yale had not one but two widows, each with her own children in attendance.  No aerial or bird's eye view of this event would satisfy photographers, who used close-up techniques to snap tear-stained faces hiding beneath yards of black tulle. 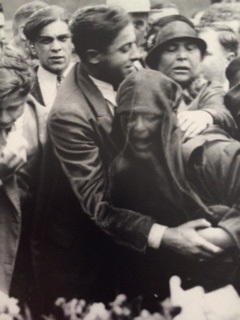 There was the "aging Mrs. Maria Yale with her two children..." and there was "the other woman, Lucienda, for whom the gangland emperor deserted Maria."

Public records indicate the likelihood that Maria (nee' Pea) might have been the only Mrs. Frankie Uale.  The two were married on March 1, 1917 in Brooklyn.  No record of a divorce or subsequent remarriage is recorded for Frankie Uale in New York City.

March 3, 1929, 'Chicago Gangland:  The True Story of its Murders, its Vices and its Reprisals," by James O'Donnell Bennett, Chicago Daily Tribune.