I was honored recently by St. Joseph Department of Public Safety (Michigan) Director Steven Neubecker for my contributions to the history of the department through my research and writing. My 2014 published true crime novel, "A Killing in Capone's Playground: The True Story of the Hunt for the Most Dangerous Man Alive" highlighted the story of Officer Charles Skelly, who was killed in the line of duty by St. Valentine's Day Massacre hit man, Fred "Killer" Burke on December 14, 1929. However, Skelly was not the first officer to meet his fate on the job. Officer Francis LaMunion had started his job as a motorcycle officer in the spring of 1927, where he likely took up a friendship with Charles Skelly. Both men were 23-years old and had the desire to fight the illegal bootleggers who found their way into the city. Sadly, Officer LaMunion suffered serious injuries one day in June 1927, while chasing after a speeding bootlegger. LaMunion crashed into the back of a laundry truck at 50 mph and was thrown from his motorcycle. Doctors could do little for him and he died the next day of massive internal injuries.

﻿
While researching the lives of the other officers included on the Berrien County Law Enforcement Memorial, I realized that Francis LaMunion's name was missing from the National Law Enforcement Memorial in Washington DC. With the help of Director Neubecker, we were able to contact the proper officials and send them the various newspaper articles that proved his death was related to injuries suffered while on duty. Two years later, it was announced that Francis LaMunion will be included on the national memorial and revealed on May 13, 2020, in Washington DC, 93 years after his death.

Having a law enforcement background and serving 25 years as a 911 Supervisor for the County of Berrien, I could not be prouder and more honored to play even a small role in seeing this through. Officer Francis LaMunion gave his life for the purpose of keeping our community safe and making sure that the bootleggers were not welcome.

I hope that the value of our research and commitment to telling true stories of the past will educate others about the Roaring Twenties and subsequent decades. 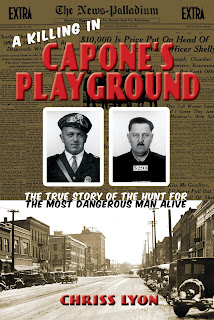 Chriss Lyon
Author of "A Killing in Capone's Playground: The True Story of the Hunt for the Most Dangerous Man Alive," Chriss Lyon has been a public safety professional and historian, who has not only walked the beat, but shot the most famous Thompson submachine guns in the world, all while documenting and researching the historic era of the “The Roaring Twenties.” Using techniques of forensic genealogy combined with investigative research, she has been able to uncover little known facts about the people and events surrounding the St. Valentine’s Day Massacre, revealing them at presentations at schools, museums, genealogical, and historical societies. Her passion in Prohibition-era gangsters, maritime, and aviation history as well as historical weather has afforded opportunities to write articles for various magazines and journals and assist other authors with historical research. Chriss began working behind the scenes at CNN Headline News but now is out in front of the camera. She has appeared in an episode of the PBS series, “History Detectives” as well as documentaries on the National Geographic Channel, Travel Channel, Investigation Discovery Channel, and the American Heroes Channel.
Older Posts Home
Subscribe to: Posts (Atom)