Buchalter, Emanuel "Mendy" Weiss and Louis Capone were sentenced to death following their 1941 New York State conviction for the September 1936 murder of Joseph Rosen. Rosen was a former trucking contractor forced out of business by Buchalter-led rackets. At the time of his murder, Rosen, then proprietor of a candy store at 725 Sutter Avenue in Brooklyn, was reportedly threatening to assist Manhattan Special Prosecutor Thomas E. Dewey in his investigation of rackets in the trucking industry.

Buchalter, believed to have ordered as many as eighty murders in his underworld career, insisted that he was completely innocent of the killing of Rosen. Weiss and Capone claimed that they had been framed. While their legal appeals of the state verdict were unsuccessful, some reviewing judges noted weakness in the state's evidence against the trio.

The executions of Buchalter, Weiss and Capone had been delayed repeatedly by legal maneuvers and by government stays. The most recent postponement occurred within an hour and a half of their scheduled appointment with the prison Death Chamber.

At 9:35 p.m. on Thursday, March 2, Governor Thomas Dewey (Dewey won election to Manhattan district attorney in 1937 and to governor in 1942) ordered a forty-eight-hour stay in response to a last-ditch Buchalter appeal to federal courts. Buchalter's attorney argued that U.S. Attorney General Francis Biddle improperly released Buchalter from federal prison, where he was serving a fourteen-year sentence for narcotics violations, to New York State authorities.

Dewey telephoned Sing Sing Warden William E. Snyder, who sent word of the postponement to the Death House prisoners through prison chaplain Father Bernard Martin. It was the sixth time their date of execution was moved. But it was the closest the prisoners had come to the electric chair. They accepted the news without visible emotion.

Buchalter, Weiss and Capone had already said their goodbyes to family members in the large pre-execution space known by inmates as "the dancehall." They had been clothed in the black pants and white shirts known as "death suits," and spots had been shaved on their heads to allow a clean connection to an electrode carrying a fatal dose of electrical current.

Some newspapers reported that Dewey ordered the stay because Buchalter decided to cooperate. They wondered about the number of crimes that information from the longtime rackets boss could solve and the number of his old underworld associates that could be brought to justice. 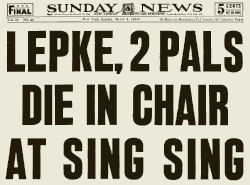 Federal district and appeals courts were unwilling to involve themselves in the case. At one o'clock in the afternoon of Saturday, March 4, the U.S. Supreme Court rejected without comment the Buchalter appeal.

The prisoners were already reliving the execution preparations when the final bit of bad news arrived.

They met with family in the same "dancehall" to say the same goodbyes. Buchalter spent the day with his wife Beatrice "Betty" and their son Harold. During the visit, Beatrice reportedly urged Buchalter to try to save himself by sending for U.S. Attorney James McNally and offering his cooperation. Her husband refused, saying, "The best I could get would be a delay of six or eight months or a year. If that's the way it's going to be, I'd rather go tonight."

Noting the press speculation following the March 2 stay of execution, Buchalter dictated a statement to his wife, who transcribed it on a piece of notepaper.

Superstition may have forced the selections for the prisoners' repeat "last meals." They ordered the same food they had eaten before the execution postponement on March 2.

Several things were different on the evening of March 4, however: Family members were permitted to stay about a half-hour past the usual parting time of nine o'clock; Buchalter was permitted to wear a pair of gray pants instead of the usual black; and there was no telephone call from the governor.


After leaving the prison, Beatrice Buchalter met with members of the press at a nearby restaurant and read her husband's statement:

I insist that I am not guilty of the Rosen murder, that the witnesses against me lied and that I did not receive a fair trial. Four out of seven judges in the Court of Appeals said that Weiss, Capone and I were not guilty. Judge [Harlan W.] Rippey said we were not given even a remote outside chance of any fair consideration of our defense by the jury and that the evidence wasn't enough to submit to a jury.
The one and only thing that I have asked for is to have a commission appointed to examine the facts in the Rosen case. If that examination does not show I am not guilty, I am willing to go to the chair regardless of what information I have given or can give.

Newspapers reported that Capone was selected to go to his death first because he was the weakest - emotionally and physically (he had recent heart problems) - of the three. He said nothing when he was strapped into the chair and the electrodes were attached to his body. His lips could be seen moving in silent prayer, as a helmet with a large electrode inside of it and a face-concealing mask on its front was placed on his head.

Executioner Joseph Francel was at the chair controls. At two minutes after eleven, he administered the first brain-killing shock. He followed it with several more jolts of current to burn the life out of Capone's organs. Three minutes later, a guard pulled open Capone's shirt, so Dr. Charles C. Sweet could check for life signs. "This man is dead," Sweet announced.

Capone's remains were removed from the chair, placed on a cart and wheeled next door to the autopsy room.

A minute later, Emanuel Weiss, thirty-seven, strode quickly into the Death Chamber with Rabbi Jacob Katz by his side. Weiss indicated to Principal Keeper Thomas J. Keeley that he wished to make a statement.

Weiss looked to the gallery and said, "I'm here on a framed case. I'm innocent and God and Gov. Dewey know it. I want to thank Judge Lehman [Appeals Court Judge Irving Lehman]. Give my love to my family and everyone. And - I'm innocent.

Weiss's turn in the chair began at seven minutes after eleven. His lifeless remains were removed from it four minutes later.

Rabbi Katz stepped from the Death Chamber to join Buchalter and escort him in. As Buchalter, forty-seven, walked confidently and silently into the chamber, journalists struggled to find some sign of emotion in the racketeer's movements or expressions.

One reporter said he saw a lip quiver. Another noticed some redness and perspiration on Buchalter's face. A wire service reporter suggested that the prisoner was "so dazed that his attitude could have been interpreted as indifference" and then found a guard to support that view with the comment, "The other two were frightened, but Lepke was paralyzed."

Gilbert Millstein of the New York Daily News observed that Buchalter was not only calm but cooperative. He placed his own arms into position to be fastened to the chair, and he leaned his head forward into the death-delivering helmet.

Buchalter's family assembled for a brief service at Park West Memorial Chapel, 115 West Seventy-ninth Street in Manhattan, on Sunday, March 5. Prayers were chanted by Rabbi Morris Goldberg. Buchalter's remains, in a plain oaken casket, were buried in Mount Hebron Cemetery in Flushing, Queens, next to the gravesite of his mother.

At almost the same moment, about fifty friends and family attended a ceremony for Weiss at the Midtown Funeral Home, 171 West Eighty-fifth Street in Manhattan. Rabbi Aaron Liss led those services. Weiss's widow Sophia, his mother and his four brothers attended. Weiss was also buried at Mount Hebron Cemetery, a short walk from the Buchalter gravesite.

On Thursday, March 9, the remains of Louis Capone were taken in an inexpensive metal casket from Andrew Torregrossa's funeral home, 1305 Seventy-ninth Street in Brooklyn, to the Church of Our Lady of Solace on Mermaid Avenue in Coney Island. His funeral, in the neighborhood where he was a longtime resident, drew a far larger crowd than seen at the Buchalter and Weiss services.

After a brief Mass celebrated by Father Francis A. Froelich, a procession of forty cars of mourners and five cars of flowers wended through Brooklyn streets to Holy Cross Cemetery in Flatbush. With his widow Sophie, three children and two brothers at graveside, Capone was interred in the cemetery's St. Charles section.