“He must have done something. They don’t kill you for nothing.”

The above quote is credited to gangster Edward “Ted” Newberry, the last racketeer king of Chicago’s North Side, whose corpse was found on a lonely stretch of road in Indiana on January 8, 1933. So, who was Ted Newberry and what did he do to deserve the proverbial “one way ride?”

Newberry was born on Chicago’s Northwest side on June 28, 1898, and seems to have been involved in crime most of his adult life. As a young adult he had a job as a “superintendent” at the Checker Cab Company. What he did as superintendent isn’t known for sure but it probably had something to do with sabotaging rival Yellow Cab. While there he became involved with another infamous Chicago hoodlum named Eugene “Red” Moran, whose brother Robert, became head of the company and a lifelong friend of Newberry’s.

By 1924 Newberry had moved into bootlegging and was working with a guy named Leon Tarr, who had a working relationship with another bootlegger named Harry Callan. The latter catered to the well-to-do crowd of Chicago’s “Gold Coast.” According to Callan, he “tipped” Tarr off to a customer who bought $7,000 worth of booze but never paid Callan his share. Callan called him on it and a meeting was set up. Callan was waiting on a park bench when Tarr showed up with Newberry and another guy named Arresti Cappola. Callan said that he challenged Tarr to a fist fight but Tarr drew a gun and shot him.

Callan stumbled to a cop and was taken to a hospital where he spilled the beans on how he came to be shot. Newberry was picked up for the shooting but nothing came of it. A few months later however, he took part in the murder of an Innkeeper, which almost cost him his freedom. 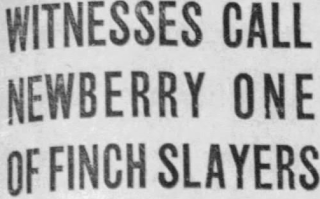 Omar Finch, about 59 years old, and his son Cole, 29, had a good thing going. They bought denatured alcohol and redistilled it into quality grain alcohol which they resold to numerous other saloonkeepers.
On December 11, 1924, Newberry and three confederates, one of whom was purported to be his colleague from the Checker Cab Co., Eugen “Red” McLaughlin, posed as Prohibition agents and kidnapped Finch in an attempt to extort him.

Finch was transporting four barrels of alcohol when he was pulled over by Newberry and his confederates. After taking his, stuff, Newberry and his associates brought him to a hotel on Chicago’s North Side where they demanded $5000 to let him go. Finch told them that he didn’t have that kind of cash but that he could raise a thousand. Newberry agreed to accept that as a down payment. They made an appointment the next day to receive the money and let Finch go.

According to Finch’s son Cole, the following day his father decided that the four barrels of alcohol weren’t worth a grand, so he decided not to pay the money. Acting under the belief that Newberry and his gang were actual Prohibition agents and not murderous thugs, Finch and his son went and moved their still and all remaining evidence. Finch believed that Newberry and company couldn’t do anything with the four barrels of alcohol and that they couldn’t prosecute him after attempting to shake him down and then letting him go. Assuming he pulled one over on the agents, Finch blew off the meeting.

A few hours later the gang burst into Finch’s saloon. They called him a double crosser then drew guns and opened fire at the saloonkeeper. One bullet proved fatal and Finch died at the hospital.

Newberry’s involvement came to the attention of the police when two young bootleggers reported that a gang of hijackers had stolen their car and their liquor on December 10. The bootleggers said that the hijackers told them they could have their car and liquor back if they paid $200. They also stated that one of the men in the car was Omar Finch. The auto used by the gangsters was described to the police who were able to trace it back to Newberry.

After the murder of his father, Cole Finch left town but returned after the arrest of Newberry. Though his wife received calls threatening that if her husband talked he’d be dead in twenty-four hours, Cole assured authorities that he would testify.

A federal investigator stated that by posing as Prohibition agents, Newberry’s gang had extorted thousands of dollars from over thirty saloonkeepers. “A federal badge was found in Newberry’s possession, and we know he used it on more than one occasion,” United States District Attorney Edwin Olson told the press. “Conviction on that alone would mean a penitentiary sentence.”

In addition to having Newberry’s car and badge, prosecutors also had Bell boys from the hotel where they kept Finch who could identify Newberry. They also had Cole and two other witnesses from the saloon that could identify Newberry as one of the killers. It didn’t look good for Newberry. But this was Chicago and although the lead up to the trial was well covered in the press, the trial itself was not. It wasn’t stated what happened but Newberry apparently went free.

By the end of the decade Newberry was a big shot on the Northwest Side of Chicago controlling the alcohol and gambling. He was considered a strong ally to the North Side gangsters headed by Bugs Moran. In fact Newberry was with Moran on the Morning of February 14, 1929 when the latter was on his way to the gang’s headquarters. As they approached their destination, they saw a couple of detective cars pull up so they took a walk. Who they thought were cops were actually gunmen employed by Al Capone who entered the garage and murdered seven of Moran’s boys.

Three months later Capone was arrested in Philadelphia on a gun charge and sentenced to a year in prison.

It appears that the Capone gang may have had their gun sights fixed on Newberry as well. On November 30, 1929, Newberry was slightly wounded in a drive-by as he was approaching a club said to be run by Moran’s gang A little over a month later, according to the Chicago Tribune, Newberry learned of a machinegun nest that was planted in an apartment across the street from his headquarters. Once this was found out, Newberry high tailed it to Canada and his second in command, Al Shimberg, fled to Michigan. Left to run things were subordinates Benny Bennett and John Rito, known as the “Billiken.”

Around the first of February Bennett disappeared. About a month later, Rito likewise disappeared but he didn’t stay disappeared for long. After spending two weeks under water, his body broke loose from its constraints and floated to the top of the Chicago River.

The day after the Billikin surfaced, Capone was released from the Eastern State Penitentiary and returned home. At some point a peace was made between Newberry and Capone and the latter recognized the former as the leader of the North Side. To commemorate, Capone gave Newberry a diamond studded belt buckle, a gift that the big guy seemed to bestow on a lot of his esteemed colleagues.

As the top man on the North Side, Newberry was frequently in the papers. He was said to be involved in bucket shops as well as an attempt to organize racetrack workers. He was also arrested for the usual stuff i.e. murder and bootlegging.

One murder that garnished him much attention was that of Chicago Tribune reporter Jake Lingle when it was discovered that Lingle was killed with a gun that was sold, in part, to Newberry. Though the gang leader wasn’t responsible for the murder of Lingle, Jack Zuta, a North Side associate was, and, since Lingle’s murder adversely affected every gangster in Chicago, Zuta had to be killed. When he got his, witnesses stated that one of the gunmen was Newberry. The accusation was never proved.

The beginning of the end for Newberry came when Capone was sent away for good in the spring of 1932. Newberry and Frank Nitti, Capone’s successor, did not get along. Reasons given are that, with Capone gone, poor management plus lower earnings due to the depression, led to the Capone organization not earning what it once did. The North Side however, which catered to the wealthy, weathered the depression better and was still making money. Nitti and Co. began to eye Newberry’s fiefdom in a most coveted manner and they started to chip away at his empire. It was also said that Newberry owed the Capone gang a large sum of money and to guarantee a return they inserted a representative to oversee affairs.

The person they sent was Gus Winkeler, who had a good relationship with Newberry, but other Syndicate men followed. Soon, Newberry felt that he was being squeezed out. His response was to have Nitti killed. On December 19, 1932 police raided Nitti’s office and one of the officers shot the gang leader a number of times, supposedly in self-defense.

It was a sloppy attempt and Nitti survived. The wounded gang leader figured out straight away who was behind the botched hit and, less than three weeks later, Newberry’s body was found. Around his waist, the diamond studded belt buckle given to him by Al Capone; a reminder of the good old days.