Donato "Daniel" J. Iamascia's gangland funeral on June 22, 1931, became a "glittering pageant" through the Italian neighborhood of Belmont in the Bronx. Though just 29 years old at the time of his death, Iamascia had already put together a lengthy criminal résumé, was well known in the area and well connected politically.

An estimated 20,000 people gathered around the Iamascia home at 2313 Belmont Avenue, the Church of Our Lady of Mount Carmel at Belmont Avenue and East 187th Street and along the few city blocks between to observe the spectacle.

Iamascia, an important member of both Arthur "Dutch Schultz" Flegenheimer's Bronx bootlegging and gambling gang and Ciro "Artichoke King" Terranova's Mafia organization, was killed as the indirect result of a Prohibition Era gangland conflict in New York City. He had been assisting Schultz in battling an insurrection by Vincent "Mad Dog" Coll, and he, Schultz and some other gang members had holed up in a ninth floor apartment at 1212 Fifth Avenue, just east of Central Park at 102nd Street. The four-room apartment had been rented by Schultz under the name of Russell Jones.

In the early morning hours of June 18, Schultz and Iamascia stepped out of the apartment building and spotted two suspicious-looking men across the street at the park. Assuming they were Coll gangsters, Schultz and Iamascia drew pistols and charged at the men. Their targets turned out to be New York City Police Detectives Julius Salke and Stephen DiRosa. Seeing their approach, Salke shouted, "We are the law!" Schultz responded by spinning about, tossing his weapon in the street and attempting to escape. Salke fired a shot into the air, convincing Schultz to surrender. Iamascia was slower to respond, and it cost him his life. As he continued to advance, Detective DiRosa fired a shot into his midsection.

Iamascia was rushed to Mount Sinai Hospital nearby, while Schultz was brought to the East 104th Street Police Station for questioning and then locked up in the West Side Jail. Police found that the gang boss was in possession of more than $18,600 in cash at the time of his arrest. Three hours after the encounter with detectives, Iamascia died from his wound.

After news of his death was released, numerous and massive floral displays began showing up at the Iamascia residence, a two-story, two-family brick building that was home to Iamascia, his wife, his widowed mother, three sisters, an older brother and his family and a younger brother. (Another brother of Daniel lived with his wife nearby at 2319 Belmont Avenue.) By the night before the funeral, the house could not accommodate the flowers. Additional offerings filled a two-car garage behind the building and spilled out into the driveway.

A display said to have been furnished by Iamascia's mother featured a clock of flowers within a six-foot heart. The hands of the clock showed ten minutes past six, the moment that Iamascia passed away. "The Boys" sent a broken-column display eight feet in height. And "A Pal" sent a six-foot heart of roses.

On the morning of June 22, Iamascia's remains were taken from the family home in a "German silver" coffin reportedly valued at $20,000 (probably a vastly inflated figure). A procession of nearly one hundred and fifty automobiles followed the hearse to the church. Thirty-five of the cars carried the flowers. According to one report, it took the procession thirty minutes to pass any given spot on the short route.


Seats within the church were reserved for the Iamascia family. About three hundred and fifty people were seated, all said to be related to the deceased. About three thousand curious neighborhood residents clustered around the building.

Neither Terranova nor Schultz appeared at the funeral. Schultz remained in custody, facing charges including felonious assault and Sullivan Law violation. A government lien was placed against the cash found on him, as it was suspected that he had been evading his taxes.

After a Requiem Mass celebrated by the Rev. John Southwick of Dobbs Ferry, New York, a family friend, the cortège proceeded to St. Raymond's Cemetery. Iamascia's coffin was placed temporarily in a receiving vault. It was reported that Iamascia had recently contracted for the construction of a $25,000 family vault  - his father had died a year earlier - that was not yet completed.

The Iamascia family announced that it was pursuing a civil lawsuit against Detective DiRosa for his conduct during the incident. The NYPD found no reason to criticize either of the involved detectives. In fact, on the morning after Daniel Iamascia's funeral, both were promoted from third grade to second grade detective.
Posted by Thomas Hunt at 12:09 PM No comments:
Email ThisBlogThis!Share to TwitterShare to FacebookShare to Pinterest
Labels: Belmont, Bronx, Coll, Daniel Iamascia, DiRosa, Dutch Schultz, Funeral, June 22, Mafia, New York City, Prohibition, Terranova, Thomas Hunt

Having just endured yet another session of police interrogation (this time was about a drug ring), Lucky Luciano was exhausted but determined to keep a scheduled meeting with would-be biopic producer Martin Gosch.  The latter was arriving from Spain, where he'd taken up a home-away-from-home in the late 1950's. Gosch had been meeting with Luciano periodically since at least 1960.  Both wanted a movie made, although Lucky and movie producers historically had great differences of opinion in storyline.

The pair did in fact meet at the Capodichino airport in Naples on January 26, 1962. Gosch's plane arrived just after 4:00 pm, and he was greeted by Lucky and an English-speaking police officer named Cesare Resta (Luciano invited Resta to help prove he was not making drug deals). Inside, Lucky sipped on a fruit drink, chatting with Gosch. Shortly after 5:00 pm, as they were walking toward Lucky's car in the parking lot, the aging gangster stumbled, uttering the last words, "Martin, Martin."

Gosch knew Lucky had a heart condition, but it was too late (when onlookers saw the producer trying to place a pill in the fallen man's mouth the foundation for conspiracy theories was inadvertently laid).  The airport's on-staff physician arrived, placed a stethoscope to Luciano's chest, then clearly stated the finality of situation, albeit in a laconic, matter-of-fact way - "This man is dead."

Prior the the official autopsy report, rumors of 'poisoning' were published.  Once the autopsy was revealed to the public (months later) it showed the true non-dramatic reality... Lucky Luciano had a bad heart and that bad heart gave out..  Still, there continued to be whispers of assassination, carried out to silence the once great mob boss ( be it for the proposed movie, or his alleged drug ring). Despite the media misreporting, conspiracies, and - even if it was true - the 'International Drug Ring' implications that dogged him for decades... Lucky Luciano got to have his day, because soon he would be going home.

"No solemn funeral service can be celebrated for someone who lives in 'obvious concubinage'." - Don Guido San Martino, officiating priest of the Most Holy Trinity Church of St. Joachim.

On January 29th, Don Guido San Martino, priest of the Most Holy Trinity Church of St. Joachim, gave requiem mass for Luciano.  The priest publicly stated the mass would be "without special pomp" and he felt great discomfort knowing the deceased party's 'live-in' relationship with twenty-four year old Adriana Risso (sometimes identified as Rizzo).  As for the whole 'gangster' element, the priest apparently wasn't quite as concerned, stating the service was - "For his soul and has nothing to do with what his life may have been."

Well, the service contradicted the priest's plans, yet surely unfolded just as the hordes of cops (American and Italian, plainclothes and uniform) expected.  There was pushing, shoving and verbal threats, mostly all aimed at the estimated one-hundred and fifty reporters present. Among those in attendance who were not press or police:  Lucky's brother Bartolo, nephew Salvatore, girlfriend Adriana Risso, a few American wiseguys, and although confined by law to remain in the town of Avellino's borders,  another deported gangster/friend, Joe Adonis, sent a wreath adorn with the phrase, "So Long Pal."

"Be quiet or I warn you I am going to knock someone on the head." - Unidentified elderly mourner threatening a photographer.


Luciano's mahogany casket left the church in an ornate hearse pulled by eight horses. Brother Bartolo had been trying secure permission to bring Lucky's remains back to New York for burial in the family mausoleum, so in the interim the casket would be kept in the chapel of the Cemetery of Poggioreale.  On February 7th, 1962, Salvatore 'Charlie Lucky Luciano' Lucania officially came home.  Without any religious service this time, Luciano reached his final resting place - St. John's Cemetery in Queens, New York.  He purchased the mausoleum in 1935 (reports of the pricetag vary in range from $25,000 and $30,000), and was designed with capacity for up to sixteen coffins. 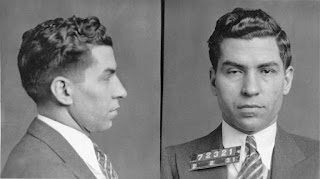 A few interesting things that happened within the weeks and months and years following Lucky Luciano's death: