Chicago's Genna is laid to rest 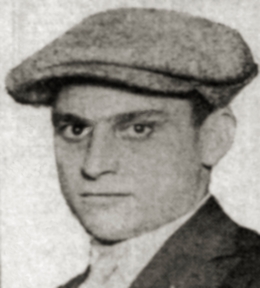 On this date in 1925, Chicago Mafia leader Angelo Genna was laid to rest at Mount Carmel Cemetery in the village of Hillside, west of the Windy City. Observers said his funeral was as spectacular as that of his gangland rival Dean O'Banion half a year earlier.


The twenty-seven-year-old Genna was shot to death earlier in the week while driving in his roadster. Authorities determined that four shotguns fired at him from an automobile that pulled alongside of his. Genna's car smashed into a lamppost at Hudson and Ogden Avenues. Genna was taken to the hospital, where he died a few hours later without providing any statement about his killers. Family members also had no useful information for police and insisted that Genna, who had been involved in gangland conflicts for years and was once tried for murder, hadn't an enemy in the world. 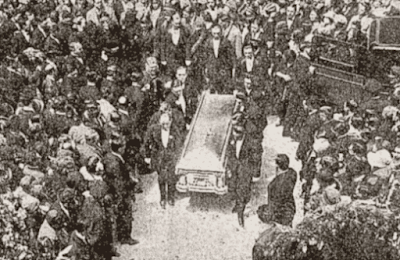 Catholic officials denied Genna a church funeral, but a priest from Holy Guardian Church visited to pray with family members. A wake was held at the home of Genna's in-laws, the Spingolas, at Taylor Street near Halsted. (The Spingolas had become Genna's in-laws just a few months earlier at a lavish wedding that reportedly featured a one-ton wedding cake.)

As thousands, including judges, politicians and federal officials, visited the Spingola home to pay their respects, the home and the sidewalk outside became filled with enormous floral tributes. Chicago Tribune reporter Genevieve Forbes Herrick noted that notorious bootlegger Johnny Torrio, then in prison, sent a large vase constructed of pink and white carnations. Herrick went on to describe additional offerings:

There were bachelor buttons from the "Boys from Cicero;" a pile of blood red roses from the widow; a heart of pinks from the boys at Spingola's garage; peonies from "Diamond Joe" Esposito; lilies from Al Capone; a mass of flowers from "Samoots" Amatuna; more flowers from the Genna boys, still more from the Spingolas, and so until they spilled out of 31 limousines on the way to the cemetery.


Another source indicated that Capone's impressive eight-foot-tall floral piece was not his only contribution. The gang boss was said to have helped arrange the funeral.

Herrick noted that Genna's wounds were carefully concealed within the open casket at the wake. "The rich folds of the purple robe swathing his body hid the dozen or so bullet wounds, ugly things, which four enemies had poured into him...," she wrote.

At 10 o'clock, Friday morning, May 29, pall bearers from the Unione Siciliana carefully moved Genna's heavy $6,000 casket - said to be bronze with silver trim and the occupant's name written in gold - to the waiting hearse. A published report estimated the weight of the casket at 1,200 pounds.

A band played as the funeral cortege - a mile and a half long - made its way to the cemetery. An estimated 20,000 people lined the narrow streets of Chicago's Little Italy to view the spectacle. Genna's remains were interred in a $10,000 vault a short distance from O'Banion's gravesite.