As 1934 faded, the new year began with Gay Orlova completely enamored by Charles "Lucky" Luciano. She promptly dropped the stockbroker boy toy who funded her wardrobe and spending allowance, and as for the husband back home in New York - Edward Finn - well, he wasn't even an afterthought. The cigar-smoking showgirl/scarred-face gangster duo quickly became close, and Orlova basically moved into Lucky's luxurious Waldorf Astoria pad. Everything was looking good for both, but the party was about to end through a series of legal entanglements that would consume each of their lives.


"Carroll, a judge of female flesh
without equal, stated unequivocally Gay was the most beautiful bimbo who ever worked for him.." -Lee Mortimer, 1959.


New York City had a new District Attorney, Thomas E. Dewey. He was a crusader (be it for righteous reasons or political gain - that's debatable) set on taking out the 'big fish' of Gotham's underworld.  Arthur 'Dutch Schultz' Flegenheimer was number one on that list. The Dutchman got whacked though (and many believe Luciano was very much behind the assassination) and therefore Dewey had to pick a new target.  Lucky Luciano fit the bill.  Charlie Lucky earned the Public Enemy No. 1 spot immediately after Schultz's death.  Investigators were very anxious to 'speak with' Lucky and Johnny Torrio (Al Capone's former mentor), but the two were conveniently 'resting' in Florida when the Dutchman got nixed.  Dewey went to work, and with the help of his staff, found a way to put a case together against Luciano - Prostitution. 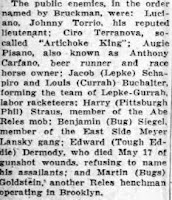 "The most dangerous and important racketeer in New York City if not in the country" - Thomas E. Dewey, characterizing Lucky Luciano, 1936

Upon hearing of Dewey's intention, Lucky fled to gangster-friendly Hot Springs Arkansas.  Gay Orlova spent a great deal of time with him there as well.  Still, Dewey diligently continued putting together a case against Luciano because sooner or later... he'd get the gang boss back to New York.   That moment of truth arrived in spring of 1936 when - after much legal back and forth battles - Luciano's luck ran out. Unlike how the government generally went after top mobsters, the DA's angle wasn't the tried and true Tax Evasion charge. Dewey had him extradited and charged with Compulsory Prostitution. He proclaimed Lucky the head of nationwide vice ring, and knew that of all vices... the sex trade would likely gain him no sympathy in court and the court of public opinion.

Orlova became the target of both prosecution and defense teams.  "I don't want her mixed up in this case," Lucky told his lawyers. When she was called into Dewey's office, the staff were both shocked and awed. Gay Orlova was adorned in diamonds, a fur coat, but most of all - spoke to the prosecution team as if they were the the shocking ones.  To Orlova, the expensive accoutrements were the norm, and she was not one to filter her thoughts. As for helping the DA, that wasn't going to happen. She continually spoke of Lucky with admiration, albeit a bit unorthodox in using the word 'sinister' as a compliment!

Luciano went to trial and was made an example of.  The judge sentenced him to a 30-50 year term! Meanwhile, Orlova began feeling paranoid.  Word spread that 'people' had been following her ever since Lucky was extradited to New York.  Plus, she still had to deal with her husband, whom she hoped would just divorce her. Simply put, a divorce wouldn't effect her citizenship.  Edward Finn had, by the time Lucky Luciano had become a household name from the sensational vice ring trial, become aware of his bride's love affair.  He was going to do something, but not divorce.

1937 should have been a welcomed change, considering how tumultuous her life had been the previous year.  However, Orlova's worst was yet to come.  First, she outright told husband Finn to "get a divorce" as she boarded a ship to France. Her plan was to get some dancing gigs and photo shoots in Paris, a city she felt comfortable and safe in.  Finn, on the other hand, took a trip straight to the courthouse and requested an annulment.  Upon pleading his case, Judge Cohalan remarked, "Have we reached a point where we should dissolve marriages because a woman won't support a man?" The court's discontent took a backseat to further convincing testimony, and Edward Finn got the judgement.

Back in Paris, the now-brunette Gay Orlova had no idea of what husband Edward had been up to. On August 11, she boarded the liner Normandie and sailed for New York (ironically, the Normandie was seized by the United States during WWII, and while being converted into a troop ship - caught fire. Suspicions of Nazi sabotage led to the government enlisting the help of the mob to protect New York's harbor, the imprisoned Lucky Luciano being a pivotal figure in the mix).  Upon arrival, authorities denied her entrance. Contrary to many news reports of the time, Orlova was not deported, but she did have to remain on the ship and sail back to France. Had Finn filed divorce, Orlova would have retained citizenship; annulment did exactly what it was designed to to - made it like she'd never been married, and no citizenship.

Back in Paris she continued to model and dance.  Then, opted for wedding bells once more, this time with a French Count whom she'd allegedly met some years prior. Three weeks after the marriage Gay divorced the Count, yet the pair remained quite close, that is until WWII interfered. Late September 1939, the French nobleman was called to duty near the Maginot Line. Orlova, always persistent when she wanted something, journeyed the northern border of France. The two reunited, but military police were extremely suspect of the flamboyantly dressed woman hiding out in a deserted village. Both the Count and Orlova were taken into custody and interrogated for hours. The word 'spy' had been muttered, and Gay knew what happens to spies - firing squad.  Finally the truth of their former marriage (and of course who they both were) reached the officers; both were set free. Orlova told to return to Paris immediately, which she did.

“All those headlines about the reunion Gay Orlova planned with Lucky Luciano came as a complete surprise – not to say shock – to him. He hasn’t heard from her in many years.” - Dorothy Kilgallen, 1946.

Over the course of several more years, the American press would periodically 'check in' on Gay Orlova, or perhaps better stated - would publish brief and unflattering grapevine gossip. Lucky's sentence got commuted and he was exiled to Italy 1946. Upon such news, whispers a purported 'reunion' soon emerged. True or merely conjecture, such a meeting never transpired.  Sadly, the most disheartening rumors were often quite true. After the apparent dissolution of any further relations with the French Count, Orlova spent time in Spain, where she met and began an affair with Pedro Eyzaguirre, the Chilean Secretary of Legation. He wasn't the only man in her life, but certainly the one she envisioned a future with. Wishful thinking again, plans were not going to materialize as she'd hoped. Gay Orlova wanted marriage. Eyzaguirre, a married man, was unable, or unwilling to get a divorce. Some reports circulated that she was destitute, others that she was depressed.  The latter was unfortunately true.


In 1948, Galina Orloff, aka Gay Orlova, turned on the gas inside her Paris apartment.  Her death went largely unnoticed, save for a single brief, inconclusive and cold mention in Walter Winchell's syndicated column on February 28th. According to Patrick Modiano (novelist and 2014 Nobel winner in literature), in his memoir Pedigree (published in 2015) Orlova (who he stated had an affair with his father) carried out her suicide on February 12th, and was interred in Sainte-Geneviève-des-Bois (the Russian Orthodox section of Cimetière de Liers).


That same year, Charles "Lucky" Luciano, found the love of his life while living in exile. Her name was Igea Lissoni, a former ballerina with whom he spent the better part of a decade with until her death (breast cancer) in 1958.  Lucky granted interviews to a number of American reporters who visited Naples. He was usually quite cryptic in responses to the questions regarding actual crimes and the subject of Gay Orlova. To the former, a jaded tongue lashed out at corrupt politics. To the latter, he never spoke in any detail, only addressing the time frame of their affair, and generally only mentioning how he spent a lot of money on material things and women.