Informer e-book can be pre-ordered now

The official release date of Informer's August 2019 special issue on Salvatore Maranzano is still a few weeks away, but the issue - in Kindle e-book form - can be pre-ordered NOW through Amazon.com. (Link: https://amzn.to/32GaLgr or click on the cover image below.) 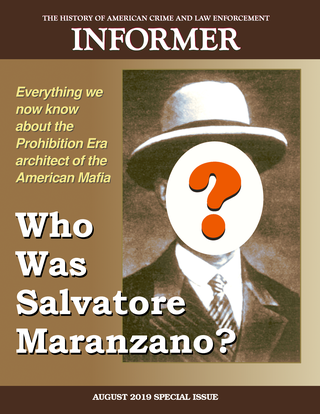 This is only the second time an Informer issue has been available for purchase through Amazon. It is the first time that an issue has been sold in Kindle e-book format.

The usual magazine formats - standard-size print and electronic PDF - will be available soon through the MagCloud service. 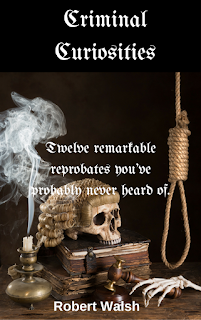 Out now for the Amazon Kindle.

As a crime writer with a long-time interest in crime's more unusual aspects, I often try to find some of its more overlooked stories. Who needs yet another rehash of Jack the Ripper or JFK reshuffling old evidence while seldom offering anything new? Apart from accountants at publishing companies wanting bestsellers to boost their quarterly balance sheets, at any rate?

All walks of life have their pioneers, those who stand out as the first, last or only example in thier field. Crime is no exception., but crime's stand-outs are seldom as widely acknowledged as, say, the first Moon landing or the discovery of the New World. It's time that changed. Criminal Curiosities is a small step toward that.

Some readers will have heard of William Kemmler or Herbert Rowse Armstrong. Kemmler was, after all, the first convict ever to be legally electrocuted. Armstrong was (and remains, the UK having abolished capital punishment) the first and only British lawyer to be hanged for murder.

But who was the first convict to face the guillotine? Why were legendary figures Thomas Edison and George Westinghouse so closely entwined with William Kemmler and he with them? Whose murder trial saw the victim's body transported to the scene of the crime, then used in a live reconstruction in front of the jury? And how on earth did Dutch art forger Han van Meegeren get away with trading a fake Vermeer for 137 genuine paintings (today worth around $60 million with, of all people, Gestapo founder and Luftwaffe commander Herman Goering?

You probably don't know. Criminal Curiosities is where you find out.

They're all singular in their own particular way. All have a fascinating tale to tell of their own misdeeds and how they sometimes forever changed the world around them. All of them are often overlooked and some are barely historical footnotes, if that.

Criminal Curiosities is currently available for the Amazon Kindle.

The book covers such topics as the 1924 Rondout mail train robbery in Illinois and the 1962 Plymouth mail truck hijacking in Massachusetts. (In each of those cases, criminals relieved the U.S. Postal Service of cash and other items worth more than $1 million.)

The author is a former postal inspector who has previously written about stamp counterfeiting and postal service robberies.

Link to this book on Amazon.