'Gangland Boston' due in October

Gangland Boston, due out in October 2017, is the newest book by Boston Globe crime reporter and author Emily Sweeney. (In 2012, Sweeney released an Images of America book entitled, Boston Organized Crime.) 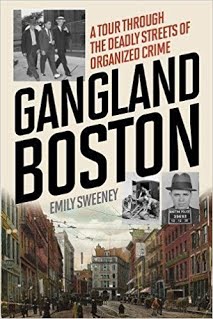 From publisher Lyons Press: "Organized criminals have haunted Greater Boston’s history, lurking just around the corner or inside that nondescript building. Packed with photos, sidebars, and maps, Gangland Bostonreveals the secrets of these places, showing how the Italian mafia and Irish gangs rose to power, how the Winter Hill gang ascended to prominence, and how James “Whitey” Bulger became the region’s most feared crime boss. These are the places where deals were made, people were killed, and bodies were unearthed. From South Boston to the North End, Chinatown, Downtown, and Charlestown; Somerville, Brookline, and more . . . come and see where mobsters lived, worked, ate, played, and died."

The book will be available in paperback through Amazon.com.